Photo: American Kennel Club
An example of the breed, this lucky English mastiff did not inherit the genetic defect for progressive retinal atrophy.

The English mastiff dog, a breed that sometimes carries the gene defect for the canine eye disease progressive retinal atrophy (PRA), has been revealed as a key animal model to help explain retinitis pigmentosa (RP) in humans. The dogs can be used to test possible therapies for the disease, according to researchers at Cornell University's Baker Institute for Animal Health and the University of Pennsylvania's Scheie Eye Institute. At least 100,000 people in the United States currently suffer vision loss and blindness from the disease.

The determination, which follows the recent Cornell discovery of the genetic mutation leading PRA blindness in the English mastiff, is reported in the April 30, 2002, Proceedings of the National Academy of Sciences (PNAS , Vol. 99 No. 9) as "Naturally occurring rhodopsin mutation in the dog causes retinal dysfunction and degeneration mimicking human dominant retinitis pigmentosa."

Although this gene defect leading to RP in humans was discovered in 1990 -- and could be simulated by genetic manipulation in mice, rats, fruit flies and pigs -- vision researchers had been searching for a large animal in which the inherited disease occurs naturally. They found that model in English mastiffs, the huge-but-gentle canines that sometimes inherit the gene defect for a particular form of PRA.

One result of the discovery is a new genetic screening test to help dog breeders eliminate the defective gene from their lines of the purebred dogs. In the meantime, Cornell researchers are continuing studies on dogs with the defective gene -- the RHO gene -- in hopes of answering a key question for both dogs and humans: What epigenetic (non-genetic or environmental) factors cause the blinding disease to progress slowly in some individuals, more rapidly in others and not at all in the lucky few who evidently have the genetic mutation but do not appear to go blind? That information might help design treatments to halt, reverse or even prevent some RP blindness in humans -- experimental therapies that now can be tested first in dogs.

"This research will greatly help in finding treatments and cures for these inherited forms of blindness in humans and eradicating the condition in dogs," said Gerald J. Chader, M.D., chief scientific officer at the Foundation Fighting Blindness, one of the sponsors of the Cornell-Pennsylvania study. Other sponsors include the National Institutes of Health, the Morris Animal Foundation/Seeing Eye Inc., and the Macula Vision Research Foundation.

Both the canine and human inherited vision disorders involve the loss of rod cells, the photoreceptors in the eye's retina responsible for black-and-white vision and night vision, and a defect in the light-sensitive pigment in the rods, called rhodopsin. Light particles, called photons, striking rhodopsin in each of some millions of rods cause the rhodopsin protein to change shape, starting a chemical-signaling cascade that enables the brain to detect light and perceive a visual image. Then the rhodopsin molecules must regenerate to their original form in the dark. The genetic defect blamed for some forms of RP in humans and PRA in dogs produces a mutated form of rhodopsin that appears unable to regenerate properly. 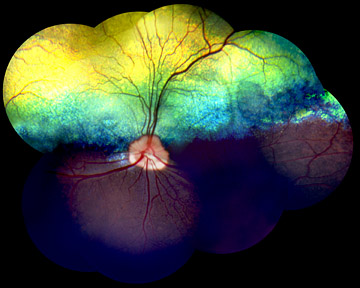 Baker Institute/Cornell University
Composite image, made through an ophthalmic instrument, shows damage to the retina of an English mastiff with progressive retinal atrophy.

"Most of us have a little trouble seeing in a darkened theater when we first come inside from the bright light," explains Gustavo D. Aguirre, the Caspary Professor of Ophthalmology in Cornell's College of Veterinary Medicine. "Then rods and the rhodopsin in our eyes begin to adapt to the dim light. But in people with this form of RP and mastiffs with PRA, the rhodopsin protein is defective and rods gradually lose the ability to recover -- first in small areas, then throughout the retina -- and they lose vision altogether. "

Gregory M. Acland, another Cornell geneticist in the vision studies, explains that in one form, human RP is an early-onset disorder with rapid loss of rods throughout the retina soon after birth, whereas in another form of RP, the loss of rods begins later in life and is more gradual. This is puzzling to researchers, but also gives them hope of finding a treatment that at least will slow the course of the disease.

Not only does the mastiff PRA -- one of several forms of PRA seen in various dog breeds -- parallel the progression of the gradual form of human RP, but the genes responsible for the disorders are located in similar parts of the human and canine genomes, Acland says. He credits Cornell researcher James W. Kijas with the lengthy and difficult task of cloning the mutant canine RHO gene.

University of Pennsylvania researchers Artur V. Cideciyan, Tomas S. Aleman, Michael J. Pianta and Samuel G. Jacobson found the critical similarities in retinal function between the mastiff disease and humans with RP that led to the decision that this was a major discovery for the field. Also contributing to the study at Cornell were Baker Institute researchers Susan E. Pearce-Kelling and Brian J. Miller.

"A 200-pound mastiff, blinded in the prime of its life by PRA, is a force to be reckoned with, especially in homes with stairs and other obstacles," Acland says. "But a blind mastiff's human companions usually can help their pet adjust to its disability. Humans who lose their vision to retinitis pigmentosa as adults face truly severe obstacles."

Gene therapy is one possible treatment, replacing the defective genes with functional ones, as a Cornell-Pennsylvania-University of Florida team did recently to cure another type of blindness in briard dogs. Now, the vision researchers hope to learn what environmental factors set the disease in motion in dogs and humans with the genetic predisposition. They anticipate that dogs will be perfect candidates to test therapies as they are developed.

And when the Mastiff Club of America, one of the sponsors of the Cornell-Penn research, wanted a souvenir from their PRA Vision Quest 2001 march against blindness in Atlanta, their T-shirt design could have been prophetic. The shirt portrays an apparently blind mastiff, walking on its hind legs and wearing dark glasses. One massive paw holds the harness of a much smaller seeing-eye dog.