ITHACA, N.Y. -- After more than 5,000 years of human-feline cohabitation and enough elaborations on "meow!" to fill a dictionary, cats still haven't mastered language. But a Cornell University evolutionary psychology study -- analyzing people's reactions to feline vocalizations -- shows that cats know how to get what they want. 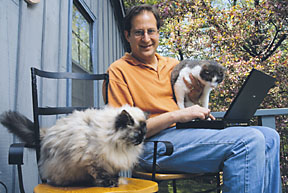 "No matter what we like to believe, cats are probably not using language," says Nicholas Nicastro, a self-described cat person who has documented hundreds of different feline vocalizations in the common house cat (Felis catus ) and its ancestor, the African wild cat (Felis silvestris lybica ). His study, which he will describe June 5, 2002, at the 143rd meeting of the Acoustical Society of America, in Pittsburgh, "shows that some very effective cat-to-human communication is going on," he says. "Though they lack language, cats have become very skilled at managing humans to get what they want -- basically food, shelter and a little human affection."

The communication study began when Nicastro, a graduate student, compiled a sample of 100 different vocalizations from 12 cats. No cats were harmed in the experiment, although a few human eardrums were stretched by what came next: He played back the recorded cat calls to 26 human volunteers and asked them to rate each sound for pleasantness and appeal, on a scale of 1 to 7. Nicastro played the same 100 sounds to a second set of 28 volunteers and asked them to indicate how urgent and demanding the sounds were, also on a 1-to-7 scale. He then analyzed the calls to see which acoustic features tended to go with pleasant or urgent meows.

Nicastro, who is a student in the laboratory of Cornell psychology assistant professor Michael Owren, found a clear negative relationship between pleasantness and urgency, rooted in how the calls sounded. "The sounds rated as more urgent (or less pleasant) were longer,". Nicastro says, "with more energy in the lower frequencies, along the lines of 'Mee-O-O-O-O-O-W!' Whereas, the sounds rated as more pleasant (or less demanding) tended to be shorter, with the energy spread evenly through the high and low frequencies. These sounds started high and went low, like 'MEE-ow.'"

An urgent or demanding call "is the kind we hear at 7 a.m. when we walk into the kitchen and the cat wants to be fed. The cat isn't forming sentences and saying, specifically, 'take a can of food out of the cupboard, run the can opener and fill my bowl immediately,' but we get the message from the quality of the vocalization and the context in which it is heard," says Nicastro, a two-cat owner who has been exposed to plenty of context.

A pleasant or appealing sound might be heard from a cat at the animal shelter if it hopes to be adopted by a soft-hearted human, Nicastro says. "In that context, it would not be to a cat's advantage to sound too demanding. The pleasant-sounding cats are the ones most likely to be adopted, while the demanding ones risk being left behind."

The Cornell study examined the evolutionary process of "artificial selection," which Charles Darwin pondered on the way to developing his theory of natural selection, Nicastro notes. "I was interested in learning how humans have shaped cat vocal behavior by artificial selection, and how cats have evolved to exploit pre-existing human perceptual tendencies. Seven thousand years ago, when we think the ancestors of our domesticated cats began wandering into Egyptian granaries and offering to trade rodent-control services for shelter, it was probably the pleasant-sounding cats that were selected and accepted into human society."

Curious about vocalization in the wild ancestors of the house cat, Nicastro visited South Africa's National Zoo in Pretoria and recorded African wild cats. Their calls were neither pleasant nor appealing, he reports. "Those cats sounded permanently angry. If they were looking for affection, they weren't expressing themselves very well. The first individuals to be accepted for domestication must have been exceptional, but of course that's the point from which things start to evolve."

Having said that, Nicastro turns off the lights in his Cornell office and heads home, where urgent calls for the can opener await. "They're not little people," he observes, "and they're not using true language because, among other reasons, cats do not know the meaning of their own meows. Humans (or at least well-trained cat people) can assign meaning to sounds with various acoustical qualities because, through long association with cats, we have learned how they sound in different behavioral contexts.