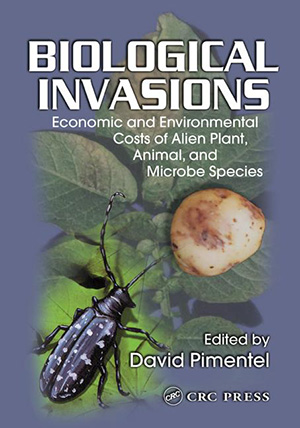 But readers of Biological Invasions: Economic and Environmental Costs of Alien Plant, Animal, and Microbe Species (CRC Press, 2002) won't want to tarry too long. An estimated 50,000 "exotics" are causing tens of billions of dollars in harm each year in the United States, according to the new book, and more are on the way. And they're not arriving via spaceships, but in the thousands of aircraft and sea-going ships in everyday commerce, the authors observe.

The book covers many of the more than 120,000 non-indigenous species that have invaded six countries (the United States, United Kingdom, Australia, India, South Africa and Brazil) and gives special emphasis to globe-traveling exotic diseases before making recommendations to help nations slow the influx.

"The impact of invasive species is second only to that of human population growth and associated activities as a cost of loss of biodiversity throughout the world," says Pimentel, a professor emeritus in Cornell's College of Agriculture and Life Sciences. "In the United States, invasions of non-native plants, animals and microbes are thought to be responsible for 42 percent of the decline of native species now listed as endangered or threatened." The names of some invading species are threatening enough. For instance, giant hogweed, a perennial herb in Britain, is blamed for serious dermatitis when it contacts skin. Root-rot fungus is a plant disease spread through Australia by feral pigs, which themselves are non-native down under. Paterson's curse, a weed that invaded Australian pastures, sickens sheep by damaging their livers with plant toxins. Yet the screw-worm fly is a curse to cattle in tropical regions everywhere in the world -- except Australia.

Other invaders sound like they stowed away in shipments of Harry Potter books: Oxford ragwort was deliberately imported from Sicily 's Mount Etna for cultivation in the Oxford Botanic Gardens in the 1700s and now is spreading though Ireland and Scotland; ivy-leafed toadflax was introduced a century before ragwort and now is a common English herb; and paddy brown spot has nothing to do with Paddington Bear but is a serious plant disease that arrived in India on imported seeds and caused the Bengal famine of 1943 in which 2 million perished.

Certain microbes need no introduction, and they didn't need a visa to traverse the continents and cause contagion. Tuberculosis, AIDS, hepatitis, influenza, cholera, bubonic plague are among diseases that the book blames on introduced pathogenic microbes. In the United States alone, health-care costs for AIDS average $6 billion a year, while a single outbreak of influenza can incur $300 million in hospitalization costs and take hundreds of lives, says Pimentel. "An increasing threat of exotic diseases exists because of rapid transportation, encroachment of civilization into new ecosystems and increasing environmental degradation," he writes.

The editor-author and his 44 contributing scientist-writers are careful to note that not all introduced species have entirely deleterious effects in their new homes, and many are depended on for human sustenance. Some 98 percent of the U.S. food supply comes from introduced species, such as corn, wheat, rice and other crops, as well as cattle, poultry and other livestock.

Or take the example of Paterson's curse (Echium plantagineum) on Australia. When the weed's toxic alkaloids aren't ruining animals' livers, its flowers produce nectar used by bees for a pale honey that fetches a premium price in the Japanese market. And in the semi-arid rangelands of northern South Australia, the damaging pasture weed is considered such a useful fodder, when handled properly, that cattlemen call it "salvation Jane." However, economic analysts cited in Biological Invasions call Paterson's curse a mixed blessing to the Outback, with an estimated $30 million in annual costs and only $2 million in benefits.

In fact, only 20 to 30 percent of the 120,000 non-indigenous species become pests and cause major environmental damage, the authors acknowledge. That proportion, however, is more than enough to merit control efforts and attempts to prevent future invasions.

"All introductions of non-native plants, animals and microbes, for whatever purposes -- including agriculture, hunting, tourism, pets, recreation and research -- should be strictly regulated," Pimentel and his co-authors conclude. "In addition, the government should make every effort to inform the public concerning the serious environmental and economic threats that are associated with alien species introductions."

Eco-revenge Is Not Always Sweet

Sometimes a second invading species comes along to control an earlier one, as happened when the aquatic weed Eurasian milfoil clogged waterways (and in several reported cases, entangled and drowned swimmers) in the United States. Years later, a natural control species from Russia -- an insect -- caught up with its favorite weed and now larvae of the aquatic moth, Acentria ephemerella, are mowing milfoil down to size.

But ecological revenge is not always as sweet as the milfoil-moth story, and like many Shakespeare tales, may not have an entirely happy ending..

European starlings owe their ticket to America to a few well-meaning fans of the bard who tried, in the 1800s, to introduce all the birds of Shakespeare's works to North America. Early efforts by the so-called American Acclimatization Society appeared to fail, but in 1890,Eugene Schieffelin released no fewer than 60 starlings in New York's Central Park.

Exhibiting uncanny avian irony, the Central Park starlings flew west -- to the eaves of the American Museum of Natural History, where they built their first preternatural nests in America and the rest is history: Today, aggressive mobs of starlings -- an estimated 200 million of them -- compete with native birds across the continent for nesting sites and food.

English sparrows were introduced here in the 1850s by Nicholas Pike, director of the Brooklyn Institute of New York, as a biological control for the destructive tree pest Eunomos subsignarrius, commonly called measuring worms or hanging worms. The New World cuisine agreed with the English sparrows, which later were renamed house sparrows. Their idea of a house is the same-sized nest cavity needed by native birds, such as chickadees, bluebirds, wrens and purple martins (which help control mosquitoes bearing a nasty invader, the West Nile virus). House sparrows frequently break other species' eggs and kill nestlings to take over. Along with European starlings, house sparrows are the only nuisance birds that legally can be destroyed under federal laws protecting native and migrating species..

Non-native cats to the rescue?

Felines can't read law books, but they know a tasty meal when they spot one -- as bird-stalking pet cats and feral cats do an estimated 465 million times a year in the United States. Like the European starling and English sparrow, Felis catus started out slowly in the colonies, transported here by European settlers for their rodent-control capabilities. (Long before that, they were introduced to Europe and the British Isles, having been domesticated from ancestral African wild cats (Felis silvestris lybica) by ancient Egyptians to patrol their granaries.) In the latter part of the 20th century, cat populations climbed faster than a runaway squirrel. There are now an estimated 63 million pet felines in the United States -- plus as many as 30 million so-called feral cats, which are formerly domesticated cats living outdoors without benefit of spaying or neutering to control their prolific reproduction.

There's just one hitch in the scheme to control nuisance birds with the introduced cat corps: Only a minority of birds killed every year by cats in the United States are the wily starlings and house sparrows. Many more victims are the native songbirds and neotropical migrants, the colorful little ones that fly north to the United States and Canada each spring to nest and try to keep their dwindling populations alive.

Placing an admittedly arbitrary value of $30 on each slain songbird, "Biological Invasions" editor David Pimentel sets the cat-killed tally at $17 billion a year. That doesn't count, he notes, all the native small mammals, amphibians and reptiles killed by feral cats and outdoor pet cats.