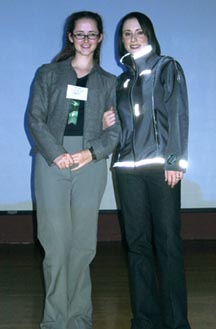 Komposite
Lucy Dunne, left, a Cornell graduate student in textiles and apparel, poses with a model wearing the smart jacket she designed, which heats and lights up and monitors pulse rates.

There are smart houses, smart cars and smart computers. Now get ready for smart clothes. At Cornell University that means a jacket that automatically heats and lights up when it is cold and dark and also contains a pulse monitor to measure activity level for joggers and walkers.

"The miniaturization of electronics has led to the emerging field of intelligent clothing, which integrates functional clothing design with portable technology," says Lucy Dunne, a graduate student pursuing a master's degree in wearable technology/smart clothing in the Department of Textiles and Apparel at Cornell's College of Human Ecology. For her senior thesis as an undergraduate last spring, Dunne developed a prototype of a smart jacket that was first modeled at the wearable electronics fashion show at the International Conference on Wearable Computers in Seattle in October.

The sporty pewter- and silver-colored jacket uses embedded sensors that regulate an electro-conductive textile in the upper back to keep the wearer warm. It also has electro-luminescent wires that light up the jacket at night, and a physiological monitor on the left wrist cuff to monitor pulse and heart rate.

"The jacket is intelligent in that it relies on sensor input to decide whether to activate functions," Dunne explains. "The user has full control over these functions, which can also be activated automatically." Although the prototype uses AA batteries for power, a commercial version, she says, might use lightweight lithium batteries.

"One of my goals with the jacket project was to demonstrate that I could produce a working smart garment with almost no budget or assistance that was practical, useful and attractive to users by using technologies that were currently available," explains Dunne, who is from Albany, N.Y. "If I could do it with all these obstacles, larger companies could do it, too, and should. So much of the current research is so big in scope that the intermediate steps never get accomplished."

Dunne's smart jacket joins a growing line of apparel that contains portable computers, sensors or wireless transmitters. "Clothes that work are a wave of the future as the American apparel industry attempts to add value since so much of the sewing work has gone overseas," says Suzanne Loker, a professor of textiles and apparel at Cornell. She researches how technology in the U.S. apparel industry could give firms a competitive advantage.

"There are a number of apparel firms trying for this niche, yet not many commercial products on the market yet," Loker notes. Some items that already are on the market, she says, include socks that prevent smelly feet by inhibiting bacteria growth; snow suits embedded with GPS (Global Positioning System) receivers to track location and with adjustable heating systems and emergency alarms; clothing that can wick away liquids without staining; and even aromatherapy business suits.