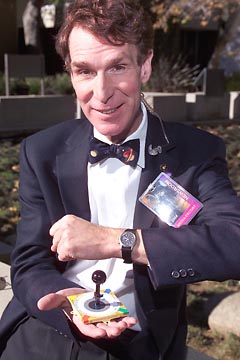 Robert Barker/University Photography
Television science educator Bill Nye '77, at JPL Jan. 3, displays a model of the sundial he helped create that is a feature on the Mars rovers.

PASADENA, Calif. -- Leave it to Bill Nye "the Science Guy" to turn a traditional piece of calibration equipment into a really cool, state-of-the-art scientific instrument. As he was looking over the designs for instruments to be carried aboard NASA's 2001 Mars Surveyor Lander, Nye noticed that the solar-panel calibration device for the lander's Pancam panoramic camera -- a small aluminum square with an upright post in the center of it -- looked familiar.

"I said, 'Hey you guys, this has got to be a sundial. It'll be great.' They said, 'Bill, this is a space program. We have a lot of clocks. Thanks for your input.' Everybody was skeptical at first but later thought it would be kind of cool," Nye recalls. The launch of the Surveyor Lander was canceled after the disappearance of the Mars Polar Lander in December 1999 following its descent into the Martian atmosphere for a landing on the planet's south polar region. But the first interplanetary sundial finally is scheduled to make it to the red planet on Jan. 3, 2004, with the landing of the first of two Mars rovers. Identical sundials, each about 3 inches square, are being carried by the two roving vehicles, Spirit and Opportunity.

The Jet Propulsion Laboratory in Pasadena, a division of the California Institute of Technology, manages the Mars Exploration Rover project for NASA's Office of Space Science, Washington, D.C. Cornell University, Ithaca, N.Y., is managing the suite of science instruments carried by the two rovers.

The sundial design team ultimately included Nye, a 1977 Cornell engineering graduate, visiting Cornell professor and host of the 1990s Public Broadcasting System show "Bill Nye the Science Guy"; Steven Squyres, Cornell professor of astronomy and principal investigator for the rovers' science program; James Bell, Cornell associate professor of astronomy and lead researcher for the high-resolution stereo panoramic cameras carried by both rovers; Woodruff "Woody" Sullivan, sundial enthusiast and professor of astronomy at the University of Washington; Tyler Nordgren, an artist and astronomer at the University of Redlands in California; Jon Lomberg, an artist and creative consultant to the Mauna Kea Center for Astronomy Education, University of Hawaii at Hilo; and Louis Friedman, executive director of the Planetary Society.

Schoolchildren across the country also contributed to the project, submitting illustrations for the sundial to Sheri Klug, director of Arizona State University's Mars Education and Outreach Program. Some of those drawings are included on the sundials.

Unlike ordinary sundials, the Mars sundials have no hour marks -- the rovers carrying them will be changing position frequently, rendering permanent hour lines meaningless. Instead, the rover science team will add hour marks electronically onto Pancam photos of the sundial. The Web site sundial page at http://athena.cornell.edu/kids/sundial.html will be updated every couple of days with new photos of the sundials, and one full day of the mission will be devoted to sundial observation.

The sundials, positioned on each rover's rear solar panel, are there not only to tell the hours but also to help the science team adjust the rovers' panoramic cameras. Scientists will use the colored blocks in the corners of the sundial to calibrate the color in images of the landscape so that Mars can be seen in its true colors. And pictures of the shadows that are cast by a sundial's center post -- in sundial terminology, the gnomon -- will allow scientists to properly adjust the brightness of each Pancam image.

"On Mars, you don't know what color anything is," Nye points out. "The Martian sky is so pink that it makes everything pink, and so you want to know if the object you're looking at is really pink or if it's pink light bouncing off the sky."

The grayscale calibration rings surrounding the gnomon represent the orbits of Mars and Earth, with two dots representing the planets. A keen observer might note that the dots are in the positions that Mars and Earth would have been in at the time of the Surveyor landing.

Each sundial is inscribed with the words "Two Worlds, One Sun" and bears the name "Mars" in 17 languages, including Bengali, Inuktituk, Lingala and Malay-Indonesian, as well as ancient Sumerian and Mayan. Four gold panels along the sides of the sundials are inscribed with stick-figure drawings of people, as well as a message to future Mars explorers:

"People launched this spacecraft from Earth in our year 2003. It arrived on Mars in 2004. We built its instruments to study the Martian environment and to look for signs of life. We used this post and these patterns to adjust our cameras and as a sundial to reckon the passage of time. The drawings and words represent the people of Earth. We sent this craft in peace to learn about Mars' past and about our future. To those who visit here, we wish a safe journey and the joy of discovery."

Another important piece of terrestrial culture is represented on the sundial: baseball, since both Nye and Sullivan are fans. To save weight, six holes in the shape of home plate were cut out of the underside of the aluminum base.