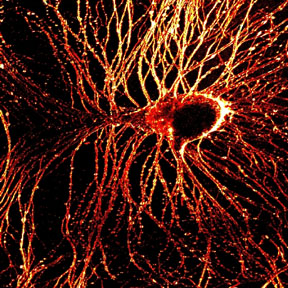 The first demonstration of the new technique, reported as the cover story in the Jan. 28, 2004, issue of The Journal of Neuroscience , was in neurons of the lowly sea slug, Aplysia . But the Cornell researchers anticipate that eventually the technique will be used in brain tissues of higher animals and could help decipher the wiring of the brain and possibly explain consequences of degenerative brain diseases such as Alzheimer's.

"This technique gives us the ability to look at membrane potential in nerve-cell signaling with high resolution deep in intact tissue, where previous methods were not applicable," says Daniel A. Dombeck, lead author on the journal paper and a graduate student in the Developmental Resource for Biophysical Imaging Opto-Electronics laboratory of Watt W. Webb, professor of applied physics at Cornell.

"With submillisecond resolution, we're beginning to see how much the electrical signals can vary between different places of a single neuron," says Dombeck. "With further development, we should be able to see how pathology affects electrical signals. We'd like to know, for example, how much Alzheimer's plaques affect the signal transmission in axons."

Multiphoton microscopy, including second-harmonic generation, produces high-resolution, three-dimensional pictures of tissue with minimal damage to living cells, using a laser that produces a stream of extremely short, intense pulses. When two or three photons strike a biological molecule at the same time, their energies combine. This has the cumulative effect of delivering one photon -- with nearly twice the energy -- to the sample. By adjusting the plane of focus, a multiphoton microscope can produce a vivid image deep within living tissue. And by "stacking" multiple images at various depths of focus, the system produces three-dimensional images or movies.

Each action potential is a single nerve impulse, traveling through a neuron as chemically gated ion channels open and close with changes in electrical polarity. The quantum physical optics phenomenon, second-harmonic generation (SHG) is the first multiphoton technique capable of detecting action potentials. SHG is particularly useful for imaging these impulses because it picks out only the cell membrane where impulses occur and does not suffer from other background signals. This selectivity, combined with SHG's fast response to the electrical signals, allows for high signal-to-noise ratio recordings of neuron signaling.

SHG in light waves, Dombeck explains, is similar to the more familiar phenomenon in sound waves, such as those produced in the body of a guitar. The second-harmonic of a guitar string's vibration is twice as high in pitch when it resonates in the wood body of the guitar. Similarly, laser light striking molecules of uniform polarity produces a second-harmonic wave of twice the energy -- or half the wavelength -- which is easily detected by the microscope in the forward propagating direction.

Thus, every change in polarity and every action potential is optically imaged in submicrometer and millisecond spatiotemporal resolution. Previous attempts in other laboratories to record fast electrical signals in live cells with SHG had achieved, at best, about 1-second resolution and were not detecting impulses a few milliseconds in duration.

"Nevertheless, with all the advantages of second-harmonic generation, we still faced two obstacles in imaging action potentials in living tissue," says Webb, the co-inventor (with Winfried Denk) of multiphoton microscopy. "First, many dyes are chemically toxic to neurons of living animals, and secondly, the intense laser pulses can cause phototoxic damage."

These obstacles were overcome by using a less-toxic dye, a longer illumination wavelength and by limiting the duration and intensity of the laser pulses. "Also, we conducted the first demonstration of this technique in a single cell of a pretty robust creature, the sea slug. But to use this imaging technique in more sensitive animals, we need to find an even less toxic dye," says Webb, adding that this will be a challenge.

But expanding the imaging from a single neuron to a larger network will be simple enough, says Dombeck. With the microscope's field of view, he says, it should be possible to record electrical signaling between many neurons at once.

Development of the new technique was supported, in part, by the Defense Advanced Research Projects Agency, the National Institutes of Health and by Centre National de la Recherche Scientifique, the French national science-funding agency. The biophysicists have applied for a patent on the process, titled "Nonlinear Optical Detection of Fast Cellular Electrical Activity," through the Cornell Research Foundation.