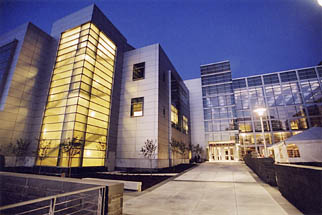 All photographs © Jon Reis Photo + Design
A evening view toward Baum atrium from the southwest side of Duffield Hall, where the Oct. 6 banquet was held. The guests were first welcomed in the tent on Lacroute Plaza, right.

Its lights shining from every window, as if it were some giant ocean liner ready to set sail across the re-landscaped Pew Engineering Quad, Duffield Hall, the new high-tech landmark on the Cornell campus, was dedicated by President Jeffrey S. Lehman, Oct. 6.

With 130 donors, alumni, faculty, administrators and staff present for an evening banquet, and then nearly 300 students, faculty and staff flooding in to take an eager look-around, the building's three commanding atriums were filled with celebrants for a grand opening on a scale not seen for many years on the campus.

The only disappointment for many was that David Duffield '62, MBA '64, who helped launch the nanotechnology research and education building with a lead gift of $20 million in 1997, was unable to be present for the dedication. On Oct. 1, he returned to PeopleSoft, the company he founded, as chief executive officer. And, as President Lehman observed, "He felt an obligation to the 12,000 PeopleSoft families to make the company he founded his top priority at this pivotal time in its history."

Instead, Duffield's brother, Al, wielded an oversized pair of scissors to cut a red ribbon across doors to the new facility on Lacroute Plaza on the south side of the building, where a tent had been set up to welcome the guests for the opening banquet. "We have waited a long time for this moment," said Lehman.

Among the more than 20 donors recognized were John Swanson (who endowed the position of Duffield Hall facilities director, held by Bill Bader, and who also has an atrium named in his honor) and Chuck Knight and the Knight family. In 1979 Chuck Knight's father, Lester B. Knight Jr., provided funding for the CNF's Lester B. Knight Jr. Laboratory. Chuck Knight has continued his late father's legacy by providing funds for Duffield's second- and third-floor Knight laboratories. As the donors were introduced, their names appeared on a large projection screen above a podium set up on the raised level of Duffield's Mattin Café. 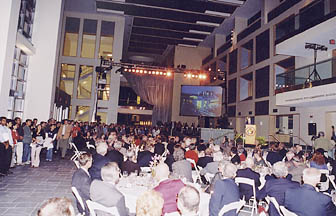 Following dinner, NASA astronaut Dan Barry '75 presented Lehman with a silicon chip nano-etched at CNF with a drawing of Duffield Hall. Barry recalled that when he took the chip on his August 2001 mission to the International Space Station aboard the space shuttle Discovery, he would set his alarm clock whenever the shuttle was above upstate New York and Ithaca. "Of course, it was always completely covered in clouds," he said. Then came the moment when the clouds parted, and "I sealed the moment in my memory."

Responded Lehman, "I want to thank you for helping make the dedication of Duffield Hall such an immense celebration of the very small."

He continued: "Dave's [Duffield] lead gift in 1997 to support construction of Duffield Hall was one of the largest ever given to the university. A few years into the project, he then made another substantial gift to inspire others to help meet the remainder of the construction costs. And most recently, he made a $15 million challenge gift to ensure that Cornell would not only have a state-of-the-art building but also an endowment to keep it at the forefront of science and technology as those fields continue to evolve."

Lehman also thanked Hopcroft, who as engineering dean "planted the seeds for this building and whose hard work started it on its way." He also thanked President Emeritus Hunter Rawlings "for embracing the promise of the new building and convincing others that it was an important initiative for Cornell." Also singled out for praise was Clifford Pollock, director of the Department of Electrical and Computer Engineering and faculty leader on the project, and Duffield Project Director Robert Stundtner. "Thank you for your devotion to Cornell, for your commitment to cutting-edge science and for making possible Cornell's worldwide leadership in nanotechnology research and discovery," he said.

Then the string music changed to a pounding beat, lights swirled and flashed and the gauzy curtains separating the Baum and the Swanson atriums parted for six leotard-clad Cornell students waving silken flags of varying colors, which they carried in leaps and twirls among the tables in movements choreographed by Joyce Morgenroth of the Department of Theatre Arts. The dancers then ushered in the waiting faculty, staff and students who had been filing into Duffield Hall since earlier in the evening. The new visitors lined the Baum atrium to hear President Lehman's official dedication.

All the guests then circulated through the hall's atriums for dessert and conversation.

The event was organized by members of the Duffield Hall Campaign project team, under the leadership of Marsha Pickens, assistant dean, College of Engineering, and James Mazza, campaign director, special projects. Technical direction for the program was by Dan Hall of the Department of Theatre Arts.