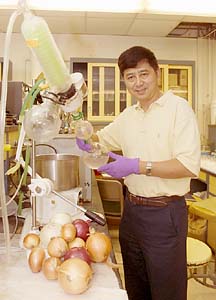 Nicola Kountoupes/University Photography
Rui Hai Liu, associate professor of food science, is seen with several onion varieties next to a rotary evaporator, which is used for antioxidant extraction, in his lab in Stocking Hall on Sept. 28.

Many onions are chock full of anti-cancer chemicals. However, certain varieties are particularly high in these compounds as well as more effective in inhibiting liver and colon cancer cell growth.

"Our study of 10 onion varieties and shallots clearly shows that onions and shallots have potent antioxidant and antiproliferation activities and that the more total phenolic and flavonoid content an onion has, the stronger its antioxidant activity and protective effect," says Liu.

The Liu group's study of varietal differences in phenolic and flavonoid content and antioxidant activities of onions against cancer cells is online athttp://pubs.acs.org/journals/jafcau/index.html . The study also will be published in the October issue of the Journal of Agricultural and Food Chemistry .

Liu found that shallots had six times the phenolic content of the onion variety with the lowest content (Vidalia). Western Yellow onions had 11 times more flavonoids than Western Whites, the onions with fewest flavonoids.

"Onions are one of the richest sources of flavonoids in the human diet," Liu points out. "And flavonoid consumption has been associated with a reduced risk of cancer, heart disease and diabetes. Flavonoids are not only anti-cancer but also are known to be anti-bacterial, anti-viral, anti-allergenic and anti-inflammatory."

Onions are also the world's second most important horticultural crop, with an annual retail value in the United States of more than $3 billion, according to Liu and his co-authors: Jun Yang, a Cornell graduate student in food science; Katherine J. Meyers, a Cornell undergraduate student in food science; and Jan Van der Heide of Cornell Cooperative Extension of Oswego County.

New York state is ranked seventh in total volume of U.S. onion production, and three of the four of the varieties with the greatest total phenolic and flavonoid content are grown in the state (pungent yellow, Northern Red and shallots).

"Although milder onions are becoming more popular, the bitter and more pungent onions seem to have more flavonoid compounds and appear to be more healthful," says Liu.

Because researchers now believe that about one-third of cancer cases could be prevented by diet, the National Cancer Institute and American Cancer Society recommend that Americans consume at least five servings of fruits and vegetables a day. A number of other studies have found that phytochemicals and antioxidants are the chemicals in fruits and vegetables that could be effective against cardiovascular disease and certain cancers, such as lung cancer, prostate cancer and melanoma.

The study was funded, in part, by the New York State Department of Agriculture and Markets.