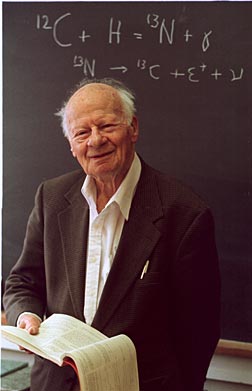 Copyright © 1996 Michael Okoniewski
Hans A. Bethe, the J. W. Anderson Professor Emeritus of Physics, in his campus office Dec. 19, 1996. On the blackboard is Bethe's "Carbon Cycle" equation for nuclear energy generation in stars.

Nobel laureate Hans Bethe, the last of the giants of the golden age of 20th-century physics and the birth of modern atomic theory, and one of science's most universally admired figures, died quietly yesterday evening at his home in Ithaca, N.Y. He was 98.

At his death, Bethe was emeritus professor of physics at Cornell University, the institution he joined in 1935 after fleeing Nazi Germany because his mother was Jewish. He was one of the most honored members of the faculty in the university's 140-year history for his work in revolutionizing our perception of the real world. But he was equally admired for his reputation for integrity, humility and concern that made him the conscience of science.

In tribute, Jeffrey S. Lehman, president of Cornell, said; "The world has lost one of the great pioneers of 20th century physics, and Cornell has lost a beloved teacher, mentor and friend. In the breadth of his insight, the rigor of his research, the depth of his social conscience and the steadfastness of his commitment to Cornell, Hans Bethe set the standard for engaged scientific citizenship that will serve as a beacon for generations to come."

Bethe's fellow Nobel laureate, physicist Robert C. Richardson, who is Cornell's vice provost for research, said; "Hans Bethe was a giant of 20th century science. He has been revered by his Cornell colleagues. He left profound and enduring marks of his intellectual leadership on Cornell, the United States, and the entire world. Bethe had an important influence upon me as a young faculty member when I arrived at Cornell in 1966. He demonstrated a clarity of thought that I could only hope to emulate some day."

Bethe's deep and abiding belief in science was unaffected by his work on developing the first atomic bomb. "The intellectual achievements of pure research are one of the things that make life worth living," he once said. Even when he had just witnessed the blinding flash from the detonation of the first nuclear explosion at Trinity site in the New Mexico desert on July 16, 1945, he professed only to a concern about the atomic bomb's functioning . "I am not a philosopher," he explained.

Yet he was deeply committed to humanitarian values, as shown in his efforts to limit the use of nuclear weapons and his work to promote the peaceful use of nuclear energy. "Science is always more unsolved questions, and its great advantage is that you can prove something is true or something is false. You can't do that about human affairs -- most human things can be right from one point of view and wrong from another," he once said.

Eminent astrophysicist, Edwin E. Salpeter, who arrived at Cornell in 1949 to study under Bethe, said of his former mentor, "He brought clarity to an amazing number of fields of science -- especially in astrophysics -- where he had to work in the face of uncertainty."

Despite the turmoil of history, Bethe remained committed to the idea of physics as a thing of beauty leading to discovery and understanding, a quest that he called "the spirit of physics." It was a spirit enunciated by his famously optimistic phrase "I can do that," always said in the face of opposition or adversity. Salpeter noted that Bethe's optimism sprang from knowing how to use the minimum mathematical complexity compatible with each problem he faced. "In his hands, approximations were not a loss of elegance but a device to bring out the basic simplicity and beauty of each field," he said.

But after World War II Bethe became a persistent champion of nuclear arms control, helping to persuade the White House to ban atmospheric nuclear tests in 1963 and antiballistic missile systems in 1972. And he stood firm in his opposition to President Ronald Reagan's Strategic Defense Initiative, the missile defense system known as Star Wars. "The Star Wars system involved impossible tasks to make lasers of unheard of power [and then] to deploy them on satellites in space," he argued.

Bethe also was a deeply committed, even sensitive, teacher, and from 1945 until his retirement from active teaching in 1975 he trained and inspired a large number of graduate students. One of them, Freeman Dyson of the Institute for Advanced Study at Princeton, once noted that Bethe would often continue classes over lunch "and that's where most of the teaching was really done."

His presence at Cornell was a magnet that attracted a world-class faculty to the university's physics department. During the 20 years following the war he became more involved in what he called "political physics," an attempt to educate the public and politicians about the consequences of the existence of nuclear weapons. He was on the President's Scientific Advisory Committee which gave advice to President Eisenhower and, later, to Presidents Kennedy and Johnson on such matters as ways to limit nuclear proliferation and further development of atomic weapons.

Bethe was truly indefatigable. In his 90s, with his left arm and shoulder wasted by a degenerative muscle disease, he continued to arrive regularly at his office at the Newman Laboratory on the Cornell campus although, he admitted, "not every day do I find anything interesting." Every day began with a 45-minute hot bath, because, he said, "You sleep, and things get somewhat unscrambled in your mind; then in the bath, I can become conscious of that." And he always carried with him his old slide rule on which he could with ease perform calculations to the sixth power.

Hans Albrecht Bethe was born July 2, 1906, in Strasbourg, now in France but then part of Germany. He showed an early genius as a mathematician, studying physics at the University of Frankfurt and doing research in theoretical physics at the University of Munich, where he was a student of Arnold Sommerfeld, the teacher of Wolfgang Pauli and Werner Heisenberg, and where he received his doctorate in 1928. In 1930 and 1931 he received fellowships, first to the University of Cambridge and then to the Institute of Physics in Rome, where he worked with Enrico Fermi. He taught at Frankfurt and Munich. At the Technical University of Stuttgart he was assistant to Paul Ewald, professor of theoretical physics, who would become his father-in-law a decade later when Bethe married Rose Ewald, then a student at Smith College in Massachusetts, and who graduated from Cornell in 1941.

Bethe's father, a professor of physiology, was a Protestant, but his mother was Jewish. This brought him into conflict with Nazi race laws after Hitler came to power, and Bethe was dismissed from his post at the University of Tubingen. He left Germany, going first to England, then to the United States and Cornell in 1935.

Bethe later said of his arrival at Cornell; "I came to America expecting to be among strangers. I came home to Ithaca." And he regarded it as home for the next 70 years.

It was Bethe who propelled Cornell's physics department into the top rank. And it was at Cornell during the late 1930s that he wrote his famous reviews of nuclear physics and, in 1938, published his seminal paper on the theory of energy production in stars that explained how the sun shines. The work was to win him the Nobel Prize in 1967.

During his years as a physicist he published papers in every decade from the 1920s through the 2000s. In 1995 Bethe's colleagues, students and friends marked his 60 years at Cornell with a two-day tribute to his life and work. "If you know his work," said John Bahcall of the Institute for Advanced Study, delivering his own appreciation, "you might be inclined to think he is really several people, all of whom are engaged in a conspiracy to sign their work with the same name."

After World War II Bethe brought some of the most outstanding young physicists at Los Alamos to Cornell, among them Richard Feynman and Robert Wilson. Under their leadership Cornell became a world center for high energy elementary particle physics. Bethe and Feynman played a central role in developing quantum electrodynamics, work for which Feynman shared the Nobel Prize in 1965.

After his retirement from teaching he devoted much of his time to astrophysics, and wrote papers with Bahcall trying to explain why the sun produced fewer particles called neutrinos than predicted by Bethe's theory of stellar energy production. And at the age of 83 he apprenticed himself to Gerald E. Brown of the State University of New York at Stony Brook in order to learn lattice gauge theory. The theory, which predicts how nuclear matter is transformed at extremely high temperatures into a plasma of particles called quarks and gluons, is one of the most challenging in all of physics. "I'm interested in learning new things," Bethe explained. The two scientists went on to publish numerous papers together on astrophysics.

He was deeply in love with the mountains, spending at least two or three weeks every summer walking in the U.S. Rockies or the Swiss Alps. He was also a stamp collector, a hobby he took up in his teens and resumed in his late 40s and continued until his death. "It was the one place in the world where all countries sat together peacefully," he said. He also was passionately interested in history.

In addition to his wife, he is survived by two children, Henry, of Ithaca, and Monica, who lives near Kyoto, Japan, and three grandchildren.