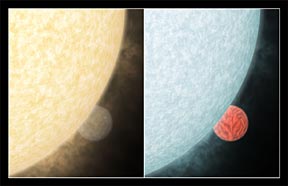 NASA/JPL/Caltech-R. Hurt
Computer-generated images demonstrate the difference between observing an extrasolar planet in visible light (left) and infrared. In visible light, the planet is almost hidden by the bright light from the star, but in the infrared they can be distinguished. In this simulation, the planet's visible-light brightness is still exaggerated; in reality the planet would be completely invisible.

At least 130 stars outside our solar system have been shown to have orbiting planets, based on a slight wobble in the stars' positions or a variation in intensity as planets pass in front of them. Both HD 209458b and TrES-1 were initially detected by these indirect methods. However, "Our Spitzer observations are the first direct measurements of light from confirmed extrasolar planets," says Joseph Harrington, a senior research associate in the Center for Radiophysics and Space Research at Cornell University, Ithaca, N.Y.

Harrington is a member of a team led by Drake Deming at NASA's Goddard Space Flight Center, which measured infrared radiation from HD 209458b. Almost simultaneously, a team led by David Charbonneau at the Harvard-Smithsonian Center for Astrophysics measured infrared emissions from TrES-1. Both planets are gas giants similar to the planet Jupiter in our solar system. But they are "hot Jupiters" because they orbit very close to their stars and absorb so much heat that they radiate strongly in the infrared. Both teams used instruments on the Spitzer Space Telescope, which was launched in August 2003. Deming's team used the Multiband Imaging Photometer for Spitzer and Charbonneau's team used the Infrared Array Camera.

The two teams announced their discoveries today (March 23, 2005) at a NASA press conference in Washington, D.C. The journal Nature has posted a paper from the Deming group in its online edition and will publish the paper in its April 7, 2005, issue. A paper from the Charbonneau group has been posted on the arXiv preprint server at Cornell and will appear in the June 20, 2005, issue of Astrophysical Journal.

Even the nearest stars to Earth are so far away that most telescopes see them only as points of light, although future specialized NASA missions hope to obtain images showing a planet separated from a sunlike star. Meanwhile, astronomers can deduce a great deal by observing the variations in a star's light and by observing its spectrum. Based on spectral type, HD 209458b is orbiting a star very much like our sun. TrES-1's star is smaller and cooler. 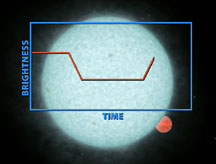 NASA/JPL/Caltech-R. Hurt
Frame from a video simulation shows in a simplified schematic how the brightness of a star/planet system varies as the planet is eclipsed by the star. The false colors represent infrared images.

Both planets are closer to their stars than is Mercury to our sun, and both complete one orbit about every three days. Tidal forces cause their rotation to match that time, so that they always turn the same face to their stars, just as the moon always has the same face to Earth. Based on HD 209458b's light output, Deming's team determined the planet's temperature at 1,130 Kelvin (857 degrees Celsius or 1,574 degrees Fahrenheit), which is about double the temperature of a pizza oven. Charbonneau's team estimates TrES-1's temperature at 1,060 Kelvin (787 degrees Celsius or 1,448 degrees Fahrenheit). The temperature measurement of HD 209458b has a possible error of plus or minus about 150 Kelvin, while for TrES-1 it is plus or minus 50 Kelvin.

Gas giants like Jupiter become very hot when they are formed, as the gas that makes them up is compressed by gravity. Jupiter cooled over time, and now has a temperature at its cloud tops of 123 Kelvin, or 150 degrees Celsius below zero. "Hot Jupiters," by contrast, receive heat from their stars and remain hot. It is this heat that makes these planets a choice for infrared detection.

A significant finding by the Deming group is that HD 209458b's eclipse behind its star occurs exactly halfway around its orbit from its transit in front, meaning that its orbit is likely circular rather than elliptical. (It could be elliptical only if the long axis of the ellipse points directly toward Earth, which would be a remarkable coincidence, the researchers say.) This finding refutes a hypothesis that the planet has an elliptical orbit due to the influence of another planet in the system. Such an orbit would have heated the planet by means of a varying tide, but this heating mechanism is now ruled out. The finding doesn't rule out other planets, only those in certain positions.

The Spitzer telescope is a NASA mission managed by the Jet Propulsion Laboratory in Pasadena, Calif. The third science instrument for Spitzer, the Infrared Spectrometer, was developed by a Cornell team led by astronomy Professor James Houck.