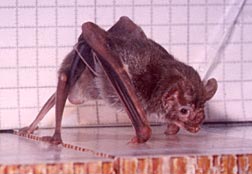 Provided
The common vampire bat, Desmodus rotundus uses its powerful forelimbs to propel itself when running.

Although most people think of bats as stealthy mammals that flit about in the night sky, at least one species has evolved a terrestrial trot never before seen in bats, according to a recent Cornell University study.

It's known that the common vampire bats of Central and South America behave much more like four-legged terrestrial mammals, in that they like to walk around on the ground; other bat species fumble helplessly when left to walk. But researchers in Cornell's College of Veterinary Medicine have discovered that these bats not only walk but run. The unprecedented gait of Desmodus rotundus is described in a brief communication in this week's issue of Nature magazine (March 17, 2005) from Daniel Riskin, Cornell graduate student in zoology, and his adviser John W. Hermanson, associate professor of biomedical sciences.

What seemed like a crazy idea -- challenging these bats on an increasingly speedy treadmill -- revealed a novel ability which the researchers believe evolved independently to facilitate feeding behavior. "What we observed was like a horse going from a walk to a gallop over a very short amount of time," Riskin explains. The researchers kept increasing the speed of the treadmill and, much to their surprise, their subjects broke into a run.

"They just seem to do everything a little differently from the general bat rule," Riskin says about what he refers to as the "cute, adorable, big-eyed and family-oriented" vampire bats.

Not only are vampire bats unusual because they run, but also in the way that they power their gait. "Unlike most animals which use their hind legs as a source of power, these exceptional creatures power their run with their forelimbs," Hermanson explains. Getting most of the push from their long forelimbs -- actually their wings and therefore very strong -- the bats run more like a small gorilla than a comparable four-legged creature like a mouse. They run up to about 2.5 miles per hour. Although many of the 1,100 species of bats are known to walk, the common vampire is the only one so far to pass Riskin and Hermanson's treadmill test and break into a running gait.

Provided
Frames from a video show how the bat propels itself when running.

With the introduction of large herds of livestock into their native environments of Central and South America, these bats don't need to hurry to catch the cattle from which they extract perhaps a tablespoon of blood at a time for sustenance. They feed while their prey are sleeping, spending perhaps 10 minutes drinking from the small cuts they make. However, running may help them avoid being stepped on, Riskin suggests. More likely, the researchers say, the ability to run evolved long ago, when vampire bats had to prey on faster South American athletes such as the agouti, a rodent about the size of a hare, which might wake up and take a swipe at the nocturnal visitor. It remains unclear exactly what the native prey were before the introduction of cattle, he adds.

The Cornell zoologists plan to go a step further and compare the vampire bat to another species of bat endemic to New Zealand. Riskin explains, "The vampire bat is good on the ground because when you feed on the hoof of an animal that weighs 14,000 times more than you do, it's dangerous." Also, there are and always have been a variety of predators in the Western Hemisphere environment. In contrast, Riskin says, the bats and birds of New Zealand had no predators to keep them flying. Many of the birds became flightless walkers, and the bats walk more than others, as flight is energetically very expensive.