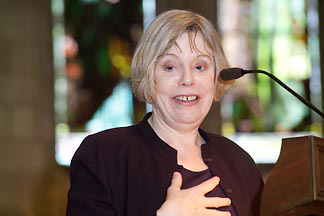 ITHACA, N.Y. -- "It's like a goldfish trying to understand a computer." That is how Karen Armstrong describes human attempts to understand God.

On April 14, Armstrong, a former Catholic nun who has written numerous books on religion, presented this year's Frederick C. Wood Lecture in Sage Chapel as part of the 75th anniversary of Cornell United Religious Work (CURW). Her speech, "God and the Religious Quest for Humanity," complemented the interfaith tradition of CURW by focusing on how religion is experienced across a variety of world cultures.

Armstrong began by recounting her experiences as a young child in the Catholic church, where she had to memorize a very specific definition of God. Pointing out that "defining" something literally means placing limits on it, she explained to the audience that she now believes God to be indefinable. "God, as God is in God's self, will never be known to us," she said. Instead, she believes that each person can experience God in his or her own way, without ever knowing all of Him.

As an example of this, Armstrong pointed to the Christian concept of the Trinity. In the Trinity, God has three hypostases, or personalities: Father, Son and Holy Spirit. Each personality is equally valid, but the entirety of who God is cannot be defined by any single one. The same could be true, she theorized, for the world's religions; they are all valid, but no one religion has all the answers.

The problems arise when practitioners of one religion begin to believe that they do have all the answers. Armstrong pointed out that people throughout history -- from Crusaders to suicide bombers -- have also used religion as "a rubber stamp" for condoning their actions, claiming that they are performed in the name of God. "Some of the worst atrocities in the world have occurred when people think they've got the Lord in their pocket," she explained.

Armstrong, an expert on Christianity, Judaism and Islam, served as a nun in a British convent, the Society of the Holy Child Jesus, from 1962 to 1967. She later wrote a tell-all book about her experiences, "Through the Narrow Gate" (St. Martin's Press, 1982). Since then she has received a degree from the University of Oxford and has written several other books, including "A History of God" (Ballantine, 1993), "Jerusalem: One City, Three Faiths" (Knopf, 1996), "The Battle for God" (Knopf, 2000) and "The Spiral Staircase: My Climb Out of Darkness" (Random House, 2004).

Another major focus of Armstrong's speech was the importance of silence and introspection as a means for achieving "transcendence," or a true religious experience. "A lot of our difficulties with religion today arise from being too articulate about God," she said. She explained that, traditionally, many world religions stay silent when it comes to describing the deity. Islam forbids depicting Allah in pictures; Judaism forbids saying the Lord's name; and even the Buddha refused to discuss the true nature of Nirvana with his students.

Armstrong also told the audience about Gregory of Nyssa, a fourth-century Christian scholar who helped draft the Doctrine of the Trinity. Nyssa wrote that thinking of God made his eyes fill with tears and made him lose all sense of where he was. "Theology should do that to us," Armstrong said. "It should touch us like a great poem."

However, in Armstrong's opinion, spiritual beliefs aren't worth much unless they are also backed up by actions. Specifically, she talked about letting go of ego, following the golden rule, and embracing nonviolence. According to Armstrong, ego is what causes people to react with violence and hatred when they feel threatened by others. "Many fundamentalists are profoundly frightened people," she said.

She also pointed out that the golden rule is not limited to the Judeo-Christian tradition. In fact, she said, it was actually defined by Confucius some 500 years before Christ.

Armstrong spent about a half hour following her speech answering questions from the audience. Leslie Shildt '04, said: "[I liked] the emphasis on humility. I think that's something a lot of people these days are lacking."

CURW was established in 1929 and it was believed to be the first interfaith program at a major American university. Today, CURW consists of 26 distinct religious communities, including Campus Crusade for Christ, Cornell Hillel, the Muslim Educational and Cultural Association (MECA) and Tibetan Buddhists.

The Wood Lecture was established in 1984 by Emma T. and Frederick C. Wood '24 in an effort to "bring scholars dedicated to innovative religious thought" to campus. Frederick Wood served as a university trustee from 1956 to 1966.

Courtney Potts is a writer intern with the Cornell News Service.