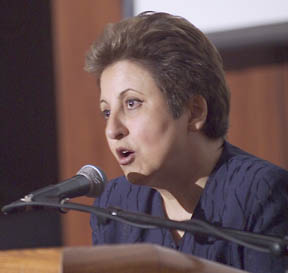 "Fighting terrorism is a legitimate fight, but it has to be done within the framework of human rights," Shirin Ebadi told a packed house in Kennedy Hall's Call Auditorium May 4.

"Democracy and human rights are the common needs of all nations," said Ebadi. But there are those who use the fight against terrorism as an excuse for violating human rights in both Western nations and Islamic countries, including Iran, she warned.

Ebadi won the 2003 Nobel Peace Prize for her work in support of human rights in Iran. Her talk, "Democracy and Public Service," was the Kaplan Family Distinguished Lecture in Public Service. She spoke in Farsi, her native language, translated into English by an interpreter. The audience included many Cornell students from Iran.

Ebadi suggested that the failure of the Soviet Union was proof that happiness cannot be imposed by governments. Even though the initial intentions of Soviet leaders to raise people's standard of living were essentially good, she said, they failed because they ignored "democracy and people's wishes." Ebadi added, "The same type of mistake is being made by religious governments that want to force people to heaven" and warned that a "mandated heaven is worse than hell." 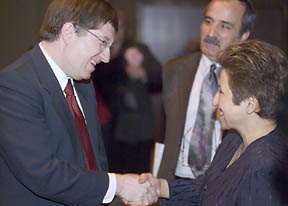 Similarly, "invading another country, even if the intentions are noble, will not only harm the democratic process in that country but will also start a cycle of violence. You can't use a bomb to give human rights to a nation," she said, drawing much applause.

She warned: "Any type of violence not only harms the democratic process but gives the government an excuse to put down any form of dissent. ... But democracy can't happen overnight or be given on a gold plate. It is a historical process that has to evolve according to its own pace." Democracy, she said, is only possible if enough people within a country want it and believe in it.

The best way for countries like the United States to bring about democratic reform in other countries is to support civil-society and nongovernmental organizations (NGOs) in those countries, Ebadi said. "Countries who claim they defend human rights in another country must first negotiate [for them]. If that doesn't work, they should use the United Nations." If they resort to violence, their claim of supporting human rights will be morally illegitimate.

Speaking of her own country, Ebadi denigrated the upcoming presidential elections as undemocratic because all candidates must be approved by the Islamic fundamentalist Guardian Council. But she also spoke of Iran's long historical tradition of equal rights for women and men ("we had a female king 1000 years ago") and of the recent growth in civil-society organizations, which, along with freedom of speech, she called "pillars of democracy." 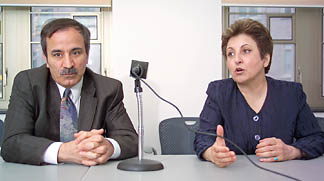 Chris Hallman/University Photography
Shirin Ebadi, right, answers a question at a media round-table discussion May 4, while interpreter Muhammad Sahimi waits to translate her response from Farsi into English.

Ebadi, the first woman in Iran to serve as a judge, was dismissed from her judicial post by the Islamic revolutionaries who have been in power since 1979. Relegated to a clerk position in the court she had once presided over, she continued to write books and articles calling for human rights in Iran. In 1992 she obtained her lawyer's license. She used it to defend woman, children and victims of government repression. She championed a law prohibiting violence against children, has led the fight against discriminatory laws against women and defended journalists' freedom of speech. Today she teaches at the University of Tehran.

To explain why the Islamic fundamentalist view of how societies should be run is too limited, she offered this Persian parable: "Truth is a mirror in the hands of God in heaven. This mirror fell out of God's hands and shattered into millions of pieces. Everyone got a piece, so everyone can claim he has a piece of the truth. I'm as right as you are because we both have a piece of the mirror that God gave us."

In response to a question about the state of women's rights in Iran today, she said that under the current Islamic fundamentalist regime the testimony given by two women in court is equal to that of one man; men can have four wives and divorce a wife without cause, whereas women have no such rights; and women need their husbands' permission to travel out of the country. She attributed such rules to ingrained regional prejudices that have shaped the interpretation of Islamic law. Other Islamic countries, such as Indonesia, which has the world's largest population of Muslims, grant women and men equal rights, she noted. "The feminist movement is strong [in Iran] and has been able to change some laws," said Ebadi, who is hopeful it will eventually prevail.

Welcomed by President Jeffrey S. Lehman, Ebadi thanked him and Cornell for teaching the Persian language and said she hoped the university would develop an actual Persian studies program, including the teaching of literature and history. In this era of globalization and disappearing borders, she said, such initiatives are essential to the preservation of cultures, which preclude democracy and human rights.

The Kaplan Family Distinguished Lecture in Public Service was created from a gift to Cornell by alumna Barbara Kaplan '59, her husband, Leslie Kaplan, son Douglas Kaplan '88 and daughter Emily Kaplan '91, in recognition of the importance of the national movement in higher education for greater involvement in civic engagement.