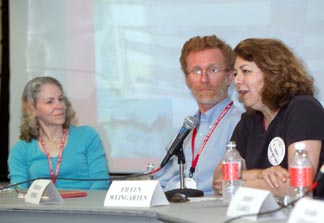 Cornell University gave Class of 1975 graduates in the College of Architecture, Art and Planning (AAP) much more than vocational training in their respective fields, said eight alumni who were part of a special panel during Reunion Weekend.

It taught them big-picture problem-solving skills and exposed them to people with entirely different backgrounds and a range of ideas that touched on everything from philosophy to technology, they said.

Titled "Can That Really Be You? How Cornell Life Influenced Where We Are Today," the panel took place June 10 in Robert Purcell Community Center auditorium and was attended by an estimated 75 AAP graduates, other reunion visitors, faculty and staff. It was moderated by Dean of Students Kent Hubbell '67, an AAP graduate.

Preceding the discussion was a special video made by alumni Phil and Maddy Handler about panel organizer and leader Jill Lerner '75, B.Arch. '76, an architect at Kohn Pedersen Fox (KPF) Associates, a recently elected Cornell trustee and a member of New York New Visions, which developed the original principles of rebuilding lower Manhattan after the terrorist attacks of Sept. 11, 2001. At Cornell, Lerner had parallel interests in architecture, art and dance, the film revealed.

Fine arts graduate Ann Marion, a panelist who is now president of Marionworks Mediated Learning Environments in Boston, said: "I am still working with concepts I learned at Cornell." Combining sophisticated animation with educational Web sites, she got involved with the technology at the Massachusetts Institute of Technology, when a professor wanted an image of himself "standing on his drawings and explaining them." She credited Cornell Professor Emeritus Steve Poleskie with expanding her ideas about what art could be, recalling, "He took us up in his plane." Poleskie, a silk-screen artist and painter, also flew loop-the-loops and other stunts in a small plane as performance art -- making patterns with exhaust smoke.

Tom Fisher, professor and dean of the College of Architecture and Landscape Architecture at the University of Minnesota, quoted theologian Thomas Merton, "To become myself, I must cease to be what I always thought I wanted to be," to explain his career path. From a family of architects, he became an educator and writer about architecture -- stimulated, he said, by the late Cornell professor of architecture Colin Rowe, "who talked about Plato and Hegel," and by Fisher's friendship with architectural critic and humanist Lewis Mumford, "who made up reading lists for me" -- leading to Fisher's graduate degree in intellectual history at Case Western Reserve University.

Eileen Weingarten, owners' representative, Forest City Rattner Companies, a major developer based in Brooklyn, N.Y., said of her time at Cornell AAP, "The weather and the workload were the great equalizers." After working for two architectural firms following graduation, she shifted to real estate development. The change was an eye-opener that led to her involvement in such projects as the Museum of Jewish Heritage in New York City and working with state and local planners, the city's parks conservancy and such artists as Sol LeWitt and Andy Goldsworthy. "There's so much more to the built environment than architecture," she commented.

"Corbu [architect Le Corbusier] may have been onto something when he said that creation is a patient search," said Jon Ross, principal of Shepley Bulfinch Richardson and Abbott architecture firm in Boston. Ross spoke about how a sixth-grade homework assignment led him to interview a local architect and begin building models of houses himself. At Cornell he was daunted by an assignment to design a house in a single night. But at Shepley Bulfinch he learned to be a good listener to clients and colleagues and is now the principal in charge of the construction of libraries, classrooms, dormitories and dining halls that "are completed in time, don't leak, are appropriate to their sites" and are becoming less "vanilla" and more "cherry Garcia" in style, he said.

John Lahey, president of Solomon Cordwell Buenz & Associates Inc., a Chicago-based architecture, planning and interior design firm, said AAP's good teachers, their emphasis on problem solving and the pressure of completing a complex project fast helped him the most professionally. "More than anything, those times of really intense effort are what you need to move [a project] forward," he said.

Marc Levoy, associate professor of computer science and electrical engineering at Stanford University, credited former architecture professor Alan Chimacoff with persuading him his talents lay in computer science, not architecture, and Don Greenberg, the Jacob Gould Schurman Professor of Computer Graphics, with encouraging him to take risks and go for the job at Stanford.

And Mark Strauss, architect, planner and urban designer at Fox & Fowle architecture firm in New York City, who served with Lerner on the New York New Visions committee, remembered how a classroom dialog about thinking beyond the four walls of a piece of architecture moved him so much that "it may have also clouded my vision." After some of the sculptures in front of the Johnson Museum were mysteriously relocated around the campus following a rowdy St. Patrick's day celebration in 1974, he wrote a letter to the Cornell Daily Sun defending those actions. "I suggested that we should take art out of the museums and distribute it around the university to make it more accessible to students and the public." Although he was lambasted for his naivete by an art history professor, Strauss's excitement about how buildings relate to their environment and to communities led to a lifelong involvement with urban design and redevelopment, he said.