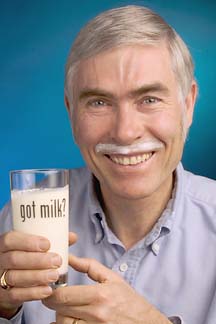 University Photography
Paul Sherman, with a milk mustache and a glass of milk, which he says many people can't digest because their ancestors lived in places where raising dairy cattle wasn't safe or economical.

Got milk? Many people couldn't care less because they can't digest it. A new Cornell University study finds that it is primarily people whose ancestors came from places where dairy herds could be raised safely and economically, such as in Europe, who have developed the ability to digest milk.

"The implication is that harsh climates and dangerous diseases negatively impact dairy herding and geographically restrict the availability of milk, and that humans have physiologically adapted to that," said evolutionary biologist Paul Sherman, a professor of neurobiology and behavior at Cornell. "This is a spectacular case of how cultural evolution -- in this case, the domestication of cattle -- has guided our biological evolution."On the other hand, most adults whose ancestors lived in very hot or very cold climates that couldn't support dairy herding or in places where deadly diseases of cattle were present before 1900, such as in Africa and many parts of Asia, do not have the ability to digest milk after infancy.

Although all mammalian infants drink their mothers' milk, humans are the only mammals that drink milk as adults. But most people -- about 60 percent and primarily those of Asian and African descent -- stop producing lactase, the enzyme required to digest milk, as they mature. People of northern European descent, however, tend to retain the ability to produce the enzyme and drink milk throughout life.

Sherman and former Cornell undergraduate student Gabrielle Bloom '03, now a graduate student at the University of Chicago, compiled data on lactose intolerance (the inability to digest dairy products) from 270 indigenous African and Eurasian populations in 39 countries, from southern Africa to northern Greenland. Their findings will be published in a forthcoming issue of Evolution and Human Behavior.

"The most likely explanation is nomadism," Sherman concluded. All 13 of the populations that can digest dairy yet live in areas that are primarily lactose intolerant were historically migratory groups that moved seasonally, Sherman said. Their nomadism enabled them to find suitable forage for their cattle and to avoid extreme temperatures. "Also, the fact that these groups maintained small herds and kept them moving probably reduced the pathogen transmission rate."

According to the National Digestive Diseases Information Clearinghouse, some 30 million to 50 million Americans are lactose intolerant, including up to 75 percent of African Americans and American Indians and 90 percent of Asian Americans. Common symptoms include nausea, cramps, bloating, gas and diarrhea that begin about 30 minutes to two hours after eating or drinking foods containing the milk sugar lactose. The use of lactase enzyme tablets or drops or lactose-reduced milk and similar products can help the lactose intolerant digest dairy products.

Sherman's study concludes that adults from Europe can drink milk because their ancestors lived where dairying flourished and passed on gene mutations that maintain lactase into adulthood. The research, he said, is an example of Darwinian medicine, a new interdisciplinary field of science that takes an evolutionary look at health, and considers why, rather than how, certain conditions or symptoms develop. Sherman, for example, recently investigated why spices are used and why morning sickness occurs.

"Both appear to serve an important function to protect the individual," Sherman said. "Spices contain antimicrobial compounds, and they may be used to destroy food-borne pathogens, especially in hot climates. Nausea and vomiting early in pregnancy also may protect women and their embryos from food-borne pathogens and other toxins."

A Darwinian medicinal view complements traditional medicine, Sherman said, because if researchers can better understand why a symptom occurs, such as a fever, runny nose or allergy, they can better evaluate whether it is best to eliminate or tolerate it.