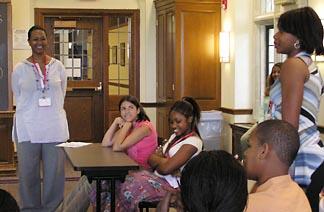 Lauren Gold/Cornell News Service
Mae Jemison, left, former astronaut and founder of the Dorothy Jemison Foundation, welcomes 22 students from around the world to the seventh annual The Earth We Share science camp, held this month on the Cornell campus.

They may not all become doctors or physicists, Mae Jemison knows. But by the end of the summer, the 22 students who gathered quietly on the morning of July 2 in Cornell University's Tatkon Center will have a running start if they do decide on careers in science -- and a giant advantage in their lives even if they don't.

Jemison came to Cornell to welcome the 12- to 16-year-olds on the first day of The Earth We Share (TEWS), a summer camp she founded in 1994 to teach students the basics of analytical thinking.

She calls the concept science literacy. But when it comes to literacy, Jemison -- a graduate of Stanford University and Weill Cornell Medical College -- not to mention a physician, engineer, former Peace Corps volunteer, professor and space shuttle Endeavour astronaut -- believes in starting her charges out on Tolstoy.

During their four weeks of camp, the students will consider some of the global problems that academicians study for years: mitigating the problems associated with population growth, for example; estimating the effects of free trade; predicting the hot public stocks in 25 years.

The participants, from as nearby as New Jersey and as far away as Ghana, will use the resources of Cornell, Ithaca and New York City for their research. The camp, in its first year on the Cornell campus, also includes plenty of time for sports, games, night sky observing and cultural activities.

After her introduction, Jemison (who lives in Houston) left the students in the care of camp teachers and interns. She will be back at the end of the month, when the students will present the conclusions to their work.

The camp is a program of the Dorothy Jemison Foundation for Excellence, named in honor of Jemison's mother. "My parents were the best scientists I knew," she said, "because they were always asking questions." Corporate and private donations allow students from a wide variety of backgrounds to attend. Past camps have been held at Dartmouth College, Colorado School of Mines, Choate Rosemary Hall and other sites around the United States. Jemison hopes, in the future, to hold it abroad.

Part of the camp's value, Jemison noted, is its inclusion of international students. Because the most important choices -- whether to use technology to advance nuclear medicine, for example, or to build nuclear bombs -- will be made by people all over the world.

"When I was up in space, you know what was remarkable about it was there was this incredible shimmering glow around the Earth," she said.

The sight gave her a new respect for the planet's strength -- and also for its vulnerability. "This incredible planet -- it will be here," she said. "We have to treat it in a way that it will continue to sustain us."