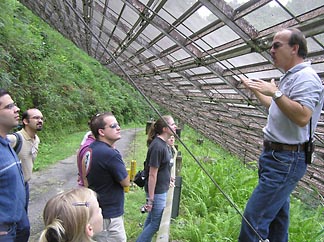 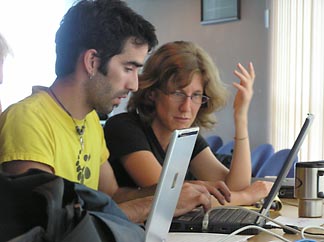 ARECIBO, P.R. -- The view from the platform of the Arecibo Observatory telescope is stunning.

The telescope itself -- giant dish below and metal structure above -- is dull gray and shiny white. On a summer afternoon, chances are you will see the dense gray clouds of a rainstorm approaching over green hills. And unless you want to get drenched, you will hurry back down the steep metal catwalk to shelter.

Many of the students came from far away: Australia (like Alyson Ford), Chile (like Felipe Perez) or Italy (like Marta Burgay). But unless they'd been here before, they had never seen a view like Arecibo's. Both structurally and aesthetically, the observatory, home to the world's biggest single-dish radio telescope, run by the National Astronomy and Ionosphere Center (NAIC) at Cornell University for the NSF -- is unique.

Brian Kent, a Cornell graduate student in astronomy, was one of the few already familiar with the observatory. "I never get tired of it," he said. "The faculty have been coming for 30 years, and they still get excited."

For the students, the pressure began on the first day. In his introductory lecture, NAIC director Bob Brown pointed out that Karl Jansky was 27 when he first detected radio waves from space in 1933. Grote Reber was in his late 20s when he confirmed Jansky's discovery and made the first surveys of radio waves from the sky. 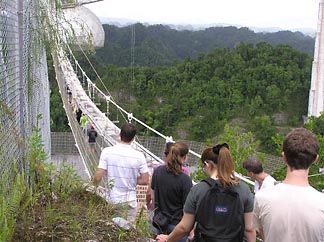 Students in this year's Single Dish Summer School at Arecibo set out across the catwalk toward the telescope's platform. "If you're afraid of heights," says their guide, "tough."

"Is there a lesson there for you guys?" Brown asked. "I think there is. Your early years are extremely important."

On the second day, the hard work started in earnest. By then the students were casually familiar with the observatory and its staff. They had made the dizzying hike across the narrow metal catwalk (carefully walking out of step with the person in front of them to avoid too much bouncing) to the top. They peered down into the Gregorian dome from a triangular platform suspended 450 feet above. Back on solid ground, they filed through the transmitter and control rooms, guided by Angel Ramos Foundation Visitor Center Director José Alonso.

They learned that northwestern Puerto Rico's karst terrain -- areas of giant funnellike sinkholes that form when water eats away at limestone -- is the perfect place for a giant dish. The location near the equator (18 degrees latitude) gives a good view of the planets and the ionosphere. And the surrounding hills decrease radio frequency interference (RFI), which can come from microwaves, car ignitions, cell phones and dozens of other technologies. RFI, which muddies the picture for astronomers measuring radio waves from stars and planets, forces scientists to spend hours deciphering which incoming signals come from civilization and which come from space.

"The sky is being bombarded by radio waves," said Alonso. "And most of the things we're trying to detect are very, very weak. It's a war against progress."

But progress at the telescope itself has never stopped. When the telescope was built in 1963, there were giant, lumbering processors, and cables had to be moved manually from one piece of equipment to another. Without phone lines to the observatory site when the dish was built, calling home meant standing on a hilltop to radio an operator in San Juan, who would then make the call to Cornell.

Originally, the telescope was only intended to study Earth's atmosphere. Now, three major upgrades and many smaller ones later, astronomers use it to see the most distant fringes of the universe.

Each Single Dish Summer School student was assigned to a group project involving observing, and the students collected data at all hours of the night. One group used Arecibo's unique radar capabilities to study Mercury. Others looked at emissions from young stars. Two groups studied pulsars. Kent's group practiced polarization calibrations on ALFA.

During the day, between lectures -- sometimes six per day from visiting and resident scientists -- the students huddled around computers, sorting through their data, fixing the inevitable first-time blunders, growing panicky as time ran out, and -- miraculously, they agreed -- pulled off presentations to the whole group on Friday.

They all had input into steering a telescope. They reduced their data into neat graphs, charts and images. And they bonded with colleagues on late-night bus rides along the steep, bendy, narrow road back to the hotel.

Mansi Kasliwal, a Cornell graduate about to start her Ph.D. studies at California Institute of Technology, who has worked with the Spitzer Space Telescope's infrared spectrograph under Cornell astronomy professor Jim Houck, said Arecibo is an utterly different experience.

"I've never felt like I've played such a big role," she said. And she will work hard to come back.

So will University of British Columbia graduate student Steve Begin -- who summed up, simply, the thrill of controlling an instrument that can sense a pulsar millions of miles away.