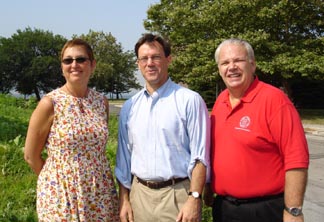 NEW YORK CITY -- In view of the Manhattan skyline, under the canopy of 100-year-old trees, is a neighborhood of 19th-century estates on uninhabited Governors Island. To set foot on this island is to be transported in time and place. Within waving distance of the Statue of Liberty, the island sits at the mouth of the East River in New York Harbor. Just a seven-minute ferry ride from lower Manhattan, the 172-acre island is a world away from its urban cousin.

In 2003, following two centuries as restricted military land, Governors Island National Monument was transferred to the U.S. Department of the Interior and is now managed by the National Park Service. Governors Island Preservation and Education Corp. (GIPEC) was then charged in spring 2004 with redeveloping the 150 acres that surround the national monument (which is highlighted by two early 19th-century fortifications, Fort Jay and Castle Williams).

Soon there will be other reasons to visit the island. Cornell Cooperative Extension-New York City (CCE-NYC), in partnership with the Hudson River Foundation, City University of New York (CUNY) and other New York City-area educational and waterfront organizations, is planning, in response to the GIPEC commission, to create Harbor 360, a public education and visitor attraction. 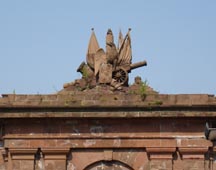 The proposed development will be a place to learn about the harbor -- its physical form, its natural processes, its biological diversity and its role in the city's history and its economy, for students, researchers, planners, policymakers and visitors.

The two primary components of Harbor 360 are the 2-acre scale interactive harborscape, which allows the viewing of the harbor side-by-side with real-time harbor research, and an 80,000-square-foot building, built to the highest environmental technology and green building standards.

CCE-NYC will lead the development of the Harbor Stewardship Education & Planning Collaborative. Fulfilling its mission of helping people through partnerships that access experience and research, CCE-NYC will focus on: environmentally focused professional development education, including "train-the-trainer" workshops; aquatic ecology education for nonformal educators and youth; and sustainable development demonstration and education. Additionally, within the Harbor 360 collaboration, CCE-NYC will conduct research-based academic programs for undergraduate and graduate students.

Governors Island was once home to former U.S. President (then Captain) Ulysses S. Grant; his regal residence, amply used since, still stands. Governors Island has continued to serve as a backdrop to history -- in 1909 Wilbur Wright departed from here on the first flight over American waters, and in December 1988 Ronald Reagan and Mikhail Gorbachev met here for one of the summits that helped end the Cold War.

The name "Governors Island" dates back to when New York was a British colony and the island was reserved for the exclusive use of New York's royal governors. In 1776 George Washington ordered the island to be fortified just prior to the Battle of Long Island -- the first-ever engagement of the fledgling American Continental Army with British forces and the largest battle of the entire Revolutionary War.

The star-shaped Fort Jay is one of the largest and best-preserved forts of its type in the country. Located inside Fort Jay's walls are four barracks that were built in the 1830s to support the New York arsenal. Castle Williams is a massive, three-tier walled fort. The interior of the castle was remodeled several times for different uses, most notably as a military prison during the Civil War.

Brenda Tobias '97 is on assignment in New York City, reporting on Cornell's many connections and collaborations in the Big Apple.