Kent Hubbell, the Robert W. and Elizabeth C. Staley Dean of Students at Cornell University, likes to work with fabric.

We're not talking hand stitching. Hubbell, who spends his days advocating for students, moonlights as an architectural designer of enormous fabric structures that look like "tents' first cousins," he says. The dramatically dipping and swooping canopies are usually installed outdoors to shelter performance spaces and walkways.

Hubbell has been creating fabric structures for 30 years, in tandem with his academic career. Among his most striking creations are the Chene Park Performing Arts Complex canopy on the Detroit waterfront, the Ann Arbor, Mich., Street Art Fair Super Umbrella, the Northgate Canopy for park-and-ride facilities in Seattle and a canopy in Baltimore to shade a pedestrian walkway and bridges. 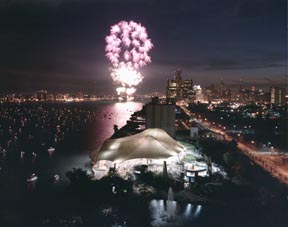 Provided by Kent Hubbell
The canopy of the Chene Park Performing Arts Complex on the Detroit waterfront during a celebration with fireworks. The canopy was designed by Kent Hubbell, who discovered fabric architecture when he was an undergraduate at Cornell.

His material of choice is Teflon-coated Fiberglas. "It's a woven glass fiber fabric that's durable, has a long life and is translucent, creating beautiful, luminous conditions day and night," says Hubbell. The fabric's biggest advantage is aesthetics. "It offers a vocabulary of forms not available otherwise," he says. To produce the structures, Hubbell works with Taiyo Birdair Corp., a firm in Buffalo, N.Y., that began as the Cornell Aeronautics Laboratory in the 1950s.

Because of the demands of his Cornell job, he now takes on only one or two projects a year, using vacation time to complete them. His latest challenge is Bandon Dunes, a stunning golf resort on the southern coast of Oregon, listed among Golf Digest's top 100 courses. "It's where very serious golfers go to play," Hubbell says. Hired to solve the problem of stray golf balls landing in a parking lot, he proposed a barrier but also offered an alternative: a canopied structure where concerts and other "après-golf" events might take place at night and other times when the course is not in use. 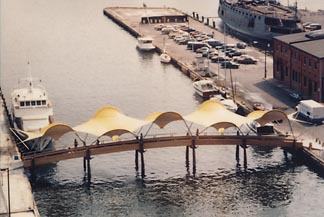 Hubbell first began working with fabric structures as a Cornell undergraduate (he earned a B.Arch. degree in 1969). "It was one of those stylistic riffs that pass through architecture schools. I never grew out of it," he says.

After graduation he joined the Peace Corps, designing and building dispensaries, schools and small hospitals in Micronesia. He earned an MFA in sculpture from Yale University in 1973, spent a year as a visiting assistant professor of architecture at Cornell, then joined the University of Michigan's architecture faculty in 1975, where he taught for 18 years and chaired his department for seven. He returned to Cornell in 1993 to chair the Department of Architecture in the College of Architecture, Art and Planning, where he remains a faculty member. Most recently he taught an introductory course on architecture for nonarchitects.

In 2001 Hubbell was tapped to become dean of students for a five-year term, a job he loves. His most important observation: "Lots of our students discover their life's work in projects and student organizations that captivate them outside the classroom. They undertake these ventures on their own initiative with fellow students with similar interests. Under the best of circumstances, these things fit with their program of study and create the foundation for a rewarding career ideally suited to their interests and abilities. This is certainly what happened in my case."

Hubbell is married to Suzann Eshleman, M.A. '71, a programmer-analyst specialist with the Department of Policy Analysis and Management in the College of Human Ecology. The couple's sons, Thor, 29, and Jonathan, 26, both attended Cornell.