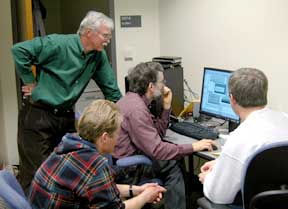 Tim Gallagher
Experts examine the acoustic evidence for Ivory-billed Woodpeckers in the Big Woods of Arkansas. From left, John Fitzpatrick, director of the Cornell Laboratory of Ornithology, Martjan Lammertink, a research biologist at the Lab and a world expert on large woodpeckers, Russ Charif, a bioacoustics researcher at the Lab, and David Luneau, a professor at the University of Arkansas who captured video footage of an Ivory-billed Woodpecker in 2004.

In a packed hall at the University of California-Santa Barbara, a Cornell University researcher played new recordings of what sounded like possibly two ivory-billed woodpeckers (Campephilus principalis ) in the "Big Woods" of Arkansas.

The presentation by bird experts from the Cornell Laboratory of Ornithology at the 123rd Stated Meeting of the American Ornithologists' Union on August 24 revealed recordings of nasally tooting "kent" calls and rapid-fire double-knocks -- telltale sounds of ivory-billed woodpeckers. The lab simultaneously released the sounds for the public to hear on its Web site http://www.birds.cornell.edu/ivory .

One recording from Jan. 24, 2005, offered the first suggestion of two ivory-billed woodpeckers in the White River National Wildlife Refuge (NWR), Ark. The audio contained a distant double-knock followed by three-and-a-half seconds of a louder, closer double-rap response, the kind of back-and-forth communication common among Campephilus woodpeckers.

The recordings were not formally presented earlier because only 20 percent of some 17,000 hours of audio from the Arkansas swamplands have been analyzed.

The ivory-billed woodpecker was considered extinct for some 60 years until bird experts, including Tim Gallagher, an editor and birder from the Cornell Lab of Ornithology, claimed to have spotted it in the Big Woods in February 2004.

The public audio presentation comes on the heels of skepticism by researchers from three other universities about blurry but carefully reviewed video evidence of the bird that appeared online on Science Express (April 28, 2005), followed by an analysis of the video and seven credible sightings in the journal Science (June 3, 2005). Lab of Ornithology Director John Fitzpatrick was lead author of the papers in collaboration with The Nature Conservancy and other researchers. 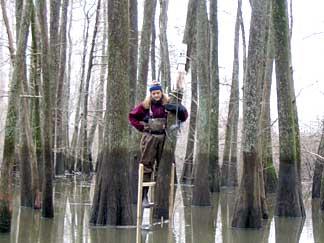 Russ Charif/Lab of Ornithology
Search team member Catherine Berchok stands on a ladder in a swamp to reach an autonomous recording unit (ARU) tied to a tree. ARUs were deployed at 153 sites in the Big Woods during the search in 2004-05.

Soon after the Science publication, several unconvinced researchers from Yale University, University of Kansas and Florida Gulf Coast University submitted a paper to the Public Library of Science (PloS) claiming the video likely captured a more common pileated woodpecker, for which the ivory-billed is often mistaken. In response, Fitzpatrick forwarded them audio files containing the kent calls and double-knocks. The recordings were so convincing that the detractors pulled their article from publication.

"The thrilling new sound recordings provide clear and convincing evidence that the ivory-billed woodpecker is not extinct," said Yale ornithologist Richard Prum, one of the PloS paper's authors on Aug. 2.

The growing evidence -- including the video and eyewitness sightings -- makes a compelling case for the woodpecker's survival.

"These recordings provide strongly suggestive additional evidence of the presence of these birds," said Russ Charif, a research biologist in the Bioacoustics Research Program at Cornell, who presented the recordings at the Ornithologists' Union meeting. The recordings are of kent calls and double-knocks, made by autonomous recording units (ARUs), digital recorders fitted in PVC piping and strapped to trees. ARUs recorded for four hours in the morning and four hours in the late afternoon, known periods of activity for ivory-billed woodpeckers. The ARUs were deployed 153 times, for two to four weeks at a time, in two main areas near the White River and Cache River NWRs.

To sift through the hours of audio, highly sensitive software developed at the Lab of Ornithology flagged sounds resembling a kent call or a double-knock. Experts at the lab could then check spectograms (audio signatures on a graph) and listen to promising sounds.

Expert reviewers to date have identified 54 of the double-knocks from ARUs that may have been made by an ivory-billed woodpecker because they occurred at appropriate times and places for an ivory-bill. Charif also played the single authenticated recording of an ivory-bill's kent call made in 1935. Researchers use that recording for comparison with the new recordings.

The most impressive sequence of calls -- some 41 clear voices occurring within hours after sunrise -- are from January 2005 from the same site in the White River NWR, only about 1.3 kilometers from where the Jan. 24 twin double-knocks were recorded.

Still, Charif noted, the recordings are not definitive proof -- tree branches, gunshots, raindrops and machinery are sometimes difficult to distinguished from double-knocks; white-breasted nuthatches can sometimes sound like an ivory-bill on recordings; and, most important, blue jays can mimic other birds' sounds.

In fact, the public is asked to mail in recordings of blue jays imitating kent calls; for instructions, see a new Web site dedicated to the new audio findings at http://www.birds.cornell.edu/ivory/field/listening/.

"The blue jay possibility is a problem," said Charif. "It's the biggest obstacle to determining if the kent-call recordings are from ivory-bills."

A team led by the Cornell Lab, The Nature Conservancy, the U.S. Fish and Wildlife Service, the Arkansas Game and Fish Commission and other partners will renew search efforts in the Big Woods beginning Nov. 1, focusing on intensive searches in areas of the Cache River and White River NWRs where promising recordings were made and where the researchers will try to record sounds of blue jays.