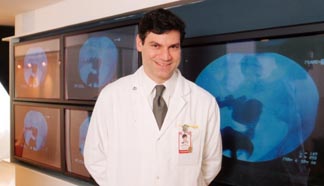 Richard Lobell
Mark Pochapin, director of the Jay Monahan Center for Gastrointestinal Health at NewYork-Presbyterian Hospital and an associate professor of clinical medicine.

NEW YORK -- Antibiotics are everywhere -- from the dry cleaners to your soap dispenser, killing off the bacteria that threaten to make you sick. But a sterile, antiseptic world might do more harm than good, and the onslaught of antibiotics might undermine their very purpose. Bacteria's blanket reputation for evil often eclipses their power for good.

Recently Mark Pochapin, director of the Jay Monahan Center for Gastrointestinal Health at NewYork-Presbyterian Hospital, in a talk at the hospital, discussed the promising if nascent field of probiotic therapy -- harnessing the powers of "good" bacteria. The hospital is affiliated with Weill Cornell Medical Center, where Pochapin is associate professor of clinical medicine.

Our immune system relies on a liberal helping of probiotic bacteria, or flora, which live contentedly in our intestinal track and rouse our body to better health. The "white knights" of bacteria, probiotics help us digest food, strengthen our immune system and fight off their bad-seed cousins, the more pathogenic bacteria strains, such as salmonella, a frequent cause of food poisoning. The indiscriminate killing of "good" and "bad" strains is too drastic, Pochapin said -- in fact, some doctors point to our body's reduced bacteria count as the culprit behind the dramatic upsurge in gastro-intestinal disorders (like irritable bowel syndrome and Crohn's disease) in our society.

"This is a new area that's completely unexplored," Pochapin said. "It may open up an entire new arm of medical therapeutics."

Pochapin explained that we have more bacteria than cells in our body. We live in harmony, not hostility, with most bacteria. He pointed out that in the H.G. Wells novel "The War of the Worlds," invading aliens succumbed not from bombs but from bacteria that they literally could not stomach.

Each of us has a unique colony of intestinal flora, anywhere from 300 to 500 different species of bacteria, which imprints itself onto the immune system and plays a crucial role in regulating our health. It begins to develop right after birth, is shaped by each infant's diet and environment, and resists change during adulthood.

The interaction between intestinal lymphoid tissue and intestinal flora early in life is critical for the development of appropriate immunoregulatory activity of the intestine. Inflammatory bowel disease (IBD) and Crohn's disease may represent, in part, an abnormal response to intestinal bacteria (intestinal T-cells -- white blood cells that mature in the thymus -- of IBD patients are hyper-reactive against bacterial proteins, spurring increased production of antibodies). Antibiotics have limited long-term effectiveness for IBD, since antibiotic-resistant strains of bacteria develop. Probiotics, however, can help regulate the intestinal flora, and they might help increase the mucosal barrier to more pathogenic bacteria -- giving a boost to the intestinal immune system.

In attempts to elevate probiotics from "the world of holistic hocus-pocus," where it's entangled with specious herbal remedies, Pochapin offered easy suggestions on how to integrate probiotics into our lives -- through foods, supplements and moderation in antibiotics.

When we've depleted our internal supply of probiotics -- whether through medicine, infection, diet or stress -- we can replenish the ranks by eating. A prime probiotic food is yogurt -- in essence, milk spoiled, or fermented, by "good" bacteria. And a pure probiotic is sold in drug stores as Culturelle, the ConAgra brand name for the probiotic strain called Lactobacillus GG, or LGG. This strain emerged as the ideal probotic in 1985 when researchers at Tufts University analyzed more than 1,000 different strains. LGG scored points for its abilities to withstand stomach acid, thrive in the intestinal tract and lock out bad bacteria.

Pochapin noted potential future benefits of supplementing infant formulas and children's diets with LGG to beef up the natural immune system. "It also would reverse the trend of overusing antibiotics in children," he said.