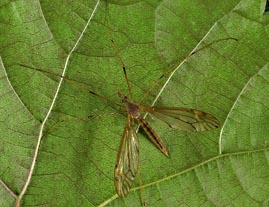 Joe Ogrodnick
Adult European crane flies, such as this one, look like large mosquitoes with extra long legs, emerge in September.

Crane flies can cause panic in bedrooms at night when the adult flies emerge in September, looking like oversized mosquitoes with extra long legs. But they don't bite. That's the good news.

The bad news is that two exotic species, the European crane fly(Tipula paludosa ) and a close relative (T. oleracea), which is sometimes referred to as the marsh or giant common crane fly, have invaded New York state and are likely to emerge as two of the most serious insect pests in turfgrass, threatening lawns, golf courses and sod farms.

The crane flies can severely damage all types of turfgrass and forage grass species and are also known to attack seedling nurseries and a wide range of vegetable and small fruits crops. Although the flies emerge in the early fall, it is the larvae in the early spring, and sometimes in the late fall, that devour roots and cause yellow spots and bare patches in grass.

These threatening crane flies are established in Nova Scotia, British Columbia and Ontario as well as along the West Coast, from northern California to Washington state. European crane fly larvae, known as leatherjackets, were first identified in Erie and Niagara counties by Cornell University entomologists in spring 2004.

"Their arrival here was probably inevitable given that the European crane fly is widespread and firmly established in southern Ontario," said Daniel Peck, assistant professor of soil insect ecology and turfgrass entomology at Cornell's Agricultural Experiment Station in Geneva, N.Y. He detected and identified the pests with Richard Hoebeke and Carloyn Klass, also entomologists at Cornell, New York's land-grand institution, and Brian Eshenaur and John Farfaglia of Cornell Cooperative Extension. 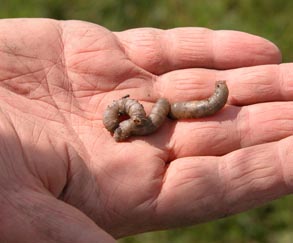 Daniel Peck
The larvae of the European crane fly, which is recently been identified in New York state for the first time, threaten lawns, golf courses, pastures, hay fields and even vegetable and flower gardens.

In 2003, the most recent date for which data is available, the turfgrass industry, which manages 3.4 million acres, contributed $5.1 billion to the state economy. "Therefore the arrival of this pest is of major significance to the golf industry and other sectors of the turfgrass industry," said Peck. Although the invasion is currently restricted to extreme western New York, any movement of infested soil could quickly spread the insect across the state. On their own, adult flies do not disperse very far because they are short-lived and relatively poor fliers, Peck said.

With more than 1,600 species of crane flies in North America, only four, including two native species, cause agricultural damage. Distinguishing species of crane flies is difficult for nonspecialists. If a homeowner, farmer or nursery operator observes damage to grass or a crop, or if they notice a high population density of flies or larvae, Peck says chances are that one of the injurious crane fly species is present. He recommends having the species confirmed by taking a sample to a local Cornell Cooperative Extension Office.

Damaging population densities were seen on at least one golf course in 2004, but healthy grass can support more than 15 to 50 larvae per square foot. Peck said that if these thresholds are exceeded and damage is not tolerable, certain chemical pesticides can be very effective in killing the pests when they are larvae. However, it is only legal in New York state to apply these chemicals when the label specifically states that the product is registered for use against crane flies. Birds and other predators can also drastically reduce populations between late fall and early spring.

Peck says he is currently testing various chemical and biological pesticides with the hope he will be able to make recommendations in the spring, when the larvae are once again on the attack.