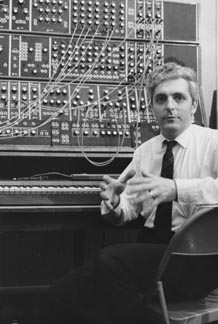 Division of Rare & Manuscript Collections
Robert Moog in front of his synthesizer, about 1968.

Robert Moog, Cornell University Ph.D '64, whose name became synonymous with the many forms of the music synthesizer he originally invented and manufactured in a Trumansburg, N.Y., storefront from 1964 to 1971, died Aug. 21. He was 71.

The Beatles, Mick Jagger and jazz bandleader-composer Sun Ra were among the first customers for Moog's then-$11,000 instrument. In 1969, the album "Switched on Bach," performed by Walter (later Wendy) Carlos on a Moog synthesizer, became a Grammy winner and one of the best-selling classical albums in history. Today the once-cumbersome synthesizer fits on a microchip. Car alarms, computer chimes and the sound signatures of products like Maxwell House coffee are all sonic concatenations of Moog's original works.

"His invention is ubiquitous and has had as much if not more impact than the invention of the piano," said David Borden, former director of the Cornell Digital Music Program. "He's probably one of the most important musical instrument makers in history."

Borden worked alongside Moog in his Trumansburg studios and later founded Mother Mallard, the first live synthesizer ensemble. The ensemble premiered in 1969 at Barnes Hall on campus under the name Mother Mallard's Portable Masterpiece Co., brandishing some of the latest musical technology engineered by Moog. In 2000 Mother Mallard performed at the Smithsonian Institution in Washington, D.C., in an event honoring Moog called "The Keyboard Meets Modern Technology." Keith Emerson, formerly of the rock music trio Emerson, Lake and Palmer, also performed.

Borden recalls helping Moog "idiot-proof" some of his early machines, which resembled banks of old-fashioned telephone switchboards, with ganglia of patch cords and circuit boards connected to a keyboard. Moog made improvements that led to the compact Minimoog, precursor of the Micromoog.

"With the Minimoog, he took the synthesizer out of the studio and put it into the concert hall," said Borden.

Moog set up his first company, R.A. Moog Co., in the old Baldwin furniture building on Main Street in Trumansburg in 1963. But the business went belly-up just as Moog was becoming a household name. In 1971 the company name was changed to Moog Music Inc., which became a division of Norlin Music Inc. in 1973. In 1978 Moog moved to North Carolina, where he founded Big Briar Inc., which designs and builds novel electronic music equipment.

Moog was born in Flushing, Queens; his father was an electronics hobbyist, and Moog enthusiastically followed suit. Moog's mother taught her son to play the piano, but in a Cornell Alumni Magazine article in 2000, he said, "You wouldn't pay money to hear me." At 14 he built his own theremin -- the first electronic instrument, named for its inventor, Leon Theremin -- based on descriptions in a hobby magazine. Moog attended the Bronx High School of Science, Queens College and Columbia University's engineering school. He ran his synthesizer business while pursuing a Cornell doctorate in solid state physics. In an interview with the Cornell Chronicle in 2000, Moog recalled his parallel efforts as a businessman trying to finish his Ph.D.

"I really tried the patience of Dr. Henri Sack, my thesis adviser. One evening in July 1965, several of us were working overtime [in the Trumansburg shop] on a custom project and it was going badly."

The phone rang. It was Sack. Moog described the call: "'Moog,' he said to me, 'Whatever's not on my desk by 10 a.m. tomorrow morning is not going in your thesis. Goodbye.' I worked all night and handed in what got done the next morning."

But then Moog almost missed his dissertation defense. Trevor Pinch, Cornell professor of science and technology studies, who got to know Moog while writing his book "Analog Days: The Invention and Impact of the Moog Synthesizer," described the rest of the story.

"As Bob rode the elevator up [to his defense] he wasn't thinking about solid state physics ... he wondered what the resonance of the elevator was, and he literally jumped up and down to find it."

The elevator lurched to halt between the fourth and fifth floors of Clark Hall. Moog was four hours late for his defense. He passed.

Moog had no idea how big his invention would become.

"When I opened the T-burg shop, I thought I was going into the electronic kit business," Moog told the Chronicle. "Then I met a composer who wanted to make electronic music on tape. We got together just for fun."

He elaborated: "The Moog synthesizer is not a single invention, activity or achievement, but rather a whole selection of related products. I've designed dozens of instruments."

Pinch said Moog's true gift was his willingness to bring performing musicians of every caliber into the process of refining his invention. From the outset, he wanted a user-friendly instrument.

That, and much more, he certainly achieved.

A "Commemoration to Robert Moog" will be held Tuesday, Sept. 13, at noon in 701 Clark Hall on campus. The event, planned prior to Moog's death, will examine the history of the synthesizer. Speakers will include Trevor Pinch, professor of science and technology studies; David Borden, former director of Cornell's Digital Music Program; and special guest Don Preston, former keyboardist for Frank Zappa and the Mothers of Invention. The event is free and open to the public.