In a time of skyrocketing gasoline prices and concerns over global warming, Cornell University is helping to spearhead the next green revolution by using plants to produce energy, industrial chemicals and green materials.

Awarded more than $8.2 million in federal funding over four years through the recent signing of the federal Transportation Bill, Cornell has been tapped by the federal government as one of five Sun Grant Centers of Excellence -- regional hubs that will take the lead in researching the use of plant biomass in energy and chemical production; for education and outreach activities; and for soliciting and funding proposals that focus on using renewable agricultural resources to produce heat, electricity, biofuels, natural products, such as biopesticides and bioherbicides, and industrial chemicals.

"With our global community entering a less certain oil future, over the next 10 to 25 years, there will be a major transition to agricultural-based bio-industries," said Larry Walker, professor of biological and environmental engineering at Cornell and director of the institute.

Cornell, the land-grant university of New York state, is the lead university for the Northeast Sun Grant Institute of Excellence, which serves 14 states and the District of Columbia, from Maine to Maryland to Michigan. That makes Cornell one of only two universities in the nation, along with Oregon State University, now designated by the federal government in all of the four categories of land, sea, space and sun grant institutions.

"Genomics, nanobiotechnology and breakthroughs in molecular biology, genetics and biological engineering have opened up a broad spectrum of opportunities and challenges for manipulating microbial and plant systems to produce novel organic compounds and to meet part of the U.S. and world energy needs," said Walker. "Opportunities abound for integrating these advances in engineering and science into regional, national and global efforts to develop sustainable industries and communities." 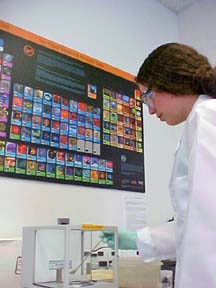 Corinne Rutzke
Kate O'Conner, a civil and environmental engineering graduate student, is working in the Walker Lab on pretreatment of switchgrass and alfalfa. Pretreatment of crop residues high in cellulose makes it easier for enzymes or microbes to access and break down the cellulose into more valuable sugars.

Involving at least two dozen Cornell faculty members, the institute was established in 2004 at Cornell. But it was not until the passing of the Transportation Bill in August that the institute was given the funding needed to solicit and award competitive grants to regional land-grant universities to work in partnership with industry, governmental agencies, communities, private entrepreneurs and others stakeholders for bringing the bio-economy to the region.

The Northeast Sun Grant Initiative will focus on biopower -- energy produced from renewable biomass for heat and electricity; biofuels -- liquid and gaseous transportation fuels, such as bioethanol and biodiesel, made from biomass resources; and bioproducts -- chemicals and materials that are traditionally made from petroleum-based resources but will be made from biomass. In each of these strategic areas, initiatives will involve feedstock development, conversion processes, systems integration and biomass public policy issues.

Currently, less than 10 percent of chemicals and commodities and less than 5 percent of U.S. energy supplies are derived from agriculturally based resources, Walker pointed out.

"Our vision is to rethink how many of the material needs of society can be met by using renewable agriculturally based raw materials," Walker said, noting that Cornell is an ideal location for the Northeast Sun Grant Institute because "it is one of very few institutions in the world that can bring together so many physical and life scientists, engineers and social scientists with the talent and interest in sustainable development, or that has access to so many bright young minds."

The Sun Grant centers not only will promote the development of bio-based energy technologies but also environmental sustainability as well as boost the economic vitality and diversity of rural communities, said Walker. He praised New York's congressional representatives -- Sherwood Boehlert, Maurice Hinchey and Jerome Nadler as well as U.S. Senators Hillary Clinton and Charles Schumer -- for their support of funding for the consortium. Gov. George Pataki's Washington office was also helpful in the political process, he said.

Michael Hoffman, director of the Cornell University Agricultural Experiment Station, said: "Funding of the Sun Grant is truly great news for Cornell, the Northeast and the nation. The Sun Grant is well positioned to help us diversify our energy supply portfolio, more important now then ever before, and generate a multitude of new natural products and industrial chemicals. We see many economic and environmental benefits for New York state farms and communities thanks to the Sun Grant."

With more than 400 life scientists at Cornell, a multitude of bio-energy and bioproducts projects are already under way on campus. They include:

Many Cornell graduate students are involved in carrying out these research activities through the U.S. Department of Agriculture Multidisciplinary Graduate and Education Training Program for bio-based industries.