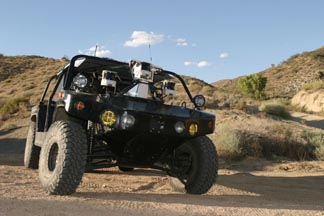 Cornell DARPA Challenge team
"Titan," Cornell's entry in the 2005 DARPA Grand Challenge, seen during testing in the desert southwest. The modified military all-terriain vehicle is driven by an on-board artificial intelligence that "sees" through an array of hood-mounted sensors.

A challenge: Build a car that can drive itself.

Impossible? Probably. In last year's competition, the most successful car only went 7.5 miles before breaking down. But a team of Cornell engineering students is in California trying, as contestants in the 2005 DARPA Challenge. They suspect they won't succeed, but they don't think anyone else will either.

Cornell is entering the competition for the first time this year and has been selected as one of 43 semifinalists based on its technical specifications and a site visit. The actual competition began Sept. 27 with a series of qualification events on a closed course to narrow the field to an expected 20 finalists for the final grueling test on Oct. 8. Events on Oct. 8 can be monitored remotely over the Internet at http://www.darpa.mil/grandchallenge.

It's an event that has "wait till next year!" built in, according to Matt Grimm '06, leader of the business team that supports the engineers. DARPA (the Defense Advanced Research Projects Agency) has offered a $2 million prize for the builders of the vehicle that can complete the course in the shortest time (with a 10-hour maximum). The goal is to create autonomous vehicles that can transport supplies or perform reconnaissance in dangerous places -- like Iraqi highways -- without endangering troops. Beyond that, the technology has applications in disaster response and space exploration. By making the task hard enough to require several years of trial and error, Grimm said, DARPA will get thoroughly tested ideas. But, he adds, Cornell is going in with a design that could succeed.

The Cornell team includes about 30 students, subdivided into computer science, mechanical, sensors and business teams. They have been working on the project since the spring of 2004. Several members of the team spent most of August testing the vehicle at the airport in Mojave, Calif., and at Jawbone Canyon, an off-road vehicle recreation site north of Mojave offering steep hills, cliffs and washboards. So far, their vehicle, which they have christened "Titan," has driven many miles through sweltering heat and rain with no system failures.

Four undergraduates on the team became so involved that they decided not to return to Ithaca this fall and have taken a semester's leave. In its technical report, the team noted, "The real-world engineering experience this contest offers is unparalleled at most universities and unequaled in any classroom."

The course will start and end in Primm, Nev., about 50 miles south of Las Vegas on the California-Nevada border, but DARPA will not reveal the route until the beginning of the test. Then, each team will be given a CD with the route laid out as a series of waypoints identified by latitude and longitude, precise down to 15 centimeters. The vehicle must figure out for itself how to get from one waypoint to the next, avoiding natural and man-made obstacles. The only command the team is allowed to give the vehicle is "start."

The Cornell team started with one of the most rugged off-road vehicles available, a Spider Light Strike Vehicle, manufactured and donated by Singapore Technologies. The all-terrain vehicle is built to military specifications and tested in combat, so it is much better able to cope with off-road conditions than an ordinary SUV or truck. The team figures that even if their sophisticated control system can't avoid an obstacle, the Spider might just be able to drive over it.

The vehicle navigates using an on-board Global Positioning System (GPS) unit accurate to within 10 centimeters, inertial and attitude sensors, stereoscopic vision and three LIDAR (light detection and ranging) sensors. They all feed into an elaborate artificial intelligence (AI) decision system that creates a small map of the immediate area around the vehicle, decides what path to follow and relays commands to controllers operating the engine, transmission and brakes. The AI not only can avoid obstacles, but also executes three-point turns and finds its way out of dead ends. The AI incorporates several different decision-making algorithms for different situations, ranging from high-speed driving over open country to careful navigation around obstacles.

In order to complete the course in 10 hours, the vehicle will have to average 17.5 mph. But since it may spend part of its journey moving very slowly over rough terrain, it will sometimes have to hit 35 to 40 mph. Thanks to powerful AMD Opteron server computers, also donated, the AI can think faster than the vehicle can move. It also monitors vehicle health with sensors reporting engine and transmission temperatures and can detect failure of any of the vehicle's sensors.