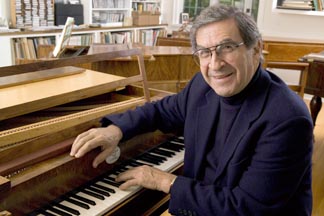 The secret is out on Malcolm Bilson's surprise 70th birthday party, and his friends, colleagues, students past and present, and all lovers of early music are invited.

The concert is an addition to an all-day music symposium (to be held Oct. 23 in B20 Lincoln Hall) and the Festival of Early Romantic Piano Music, with five concerts, Oct. 20-22 and 25-26, starting at 8 p.m. in Barnes Hall. All events are free and open to the public.

The events are sponsored by Cornell's Department of Music in celebration of Bilson's life and 37-year career at Cornell. Bilson, the Frederick J. Whiton Professor of Music and a world-famed concert musician and recording artist, is organizing the festival of performances on original and reproduction keyboard instruments.

When Bilson first came to Ithaca from the conservatory environment of the University of Illinois in 1968, "I was a regular, everyday, garden-variety pianist," he recalls. When his colleague Phillip Belt introduced him to a "Mozart piano," it was love at first recital.

"I played a concert in Barnes Hall, and it was amazing how full the hall was," Bilson says. "But what really got me turned on was that I felt for the first time I could actually play what Mozart wrote."

Bilson's enthusiasm led him to convince Cornell to put $1,000 toward the purchase of the first of several "old pianos," as he calls them.

"During the '70s, it was a great oddity to do this," Bilson says. "If I had stayed at the University of Illinoisit would have been considered silly and unrealistic, yet at Cornell I was actually encouraged." 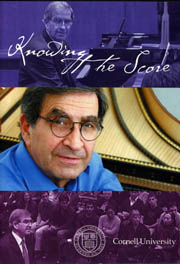 Bilson's youthful energy is well-known at Cornell. He rides a motor scooter to work, is fluent in several languages and maintains a busy teaching schedule as well as making local, national and international concert appearances year-round. He recently completed an educational video, that he hopes can change the way many musicians interpret the musical notation of Mozart, Beethoven and others. And during this week of concerts and well-wishing he also will be the principal speaker at a conference of the Music Teachers' National Association at Ithaca College.

Bilson's colleagues taking part in the Cornell celebration are quick to talk about "what makes Malcolm Malcolm."

"A lot of piano teachers are little dictators -- 'it's this way, dear' -- Malcolm, he doesn't do that. He expects the students to bring in something," says Neal Zaslaw, the Herbert Gussman Professor of Music. "He wants students with personalities and ideas, and who will defend them."

When he's near a piano, Bilson "bubbles over. He's always jumping up to try out something new," says James Webster, Goldwin Smith Professor of Music and acting music department chair. "He's a wonderful person, extremely generous. He wants to do good and wants people to be happy."

Bilson and his wife Elizabeth, a retired Cornell Space Sciences administrator, recently came back from Italy, and after the final festival concert is over on Oct. 26, Bilson will have two days off before returning to Europe to perform.

"He's totally unjaded," Zaslaw says. "He's enthusiastic like a young person; he's open to new ideas. [After a concert] my daughter Sarah said, 'he plays as if he's making it up on the spot.' He has this sort of urgency of communication."

During the concert series, early 19th century works by composers such as Hummel, Czerny, Cramer, Dussek, Ries and Clementi will be performed by Bilson and nine other pianists. Blaise Bryski will perform several exercises from Muzio Clementi's "Gradus as Parnassum, or, The Art of Playing on the Piano Forte" on a Broadwood piano in the third concert on Oct. 22, which also features music for four hands on one piano and a piece for two pianos. Two after-concert programs will feature receptions, as well as a reading of Coleridge's "The Nightingale" accompanied by Field's nocturnes, and a German melodrama with music, "Leonore."

The symposium, "Haydn and Beethoven: Piano Music and Piano Culture in the 1790s," will gather several noted musicologists and scholars to discuss the music being composed in Vienna during that period.

The celebration also coincides with the release of Bilson's DVD, "Knowing the Score." The video was produced by Dan Booth, director of Cornell's television services, "who is so good on so many levels," Bilson says. "We were lucky to stumble on this guy. He knew exactly which movements to highlight, and he even did all of the subtitles, in French and German, himself."

The video features a 90-minute lecture, performances, an interview with Bilson and a discography. "Knowing the Score" focuses on how to read, interpret and evoke passionate performance from the notation of early music.

The symposium on Oct. 23 will address the topic in a panel discussion, " 'How to Read Music': Malcolm Bilson and the Significance of Late 18th-Century Musical Notation." Parts of the video will be shown at the Ithaca College conference on Oct. 22 and in Cornell's weekly music department colloquium on Oct. 24, 4:15 p.m. in B21 Lincoln Hall.

Programs (all at 8 p.m. in Barnes Hall) are free and open to the public.