An online tutorial to guide librarians in the Middle East in the preservation of books and manuscripts has been developed by Cornell University Library's Department of Preservation and Collections Maintenance.

The tutorial, available in both Arabic and English, is based on Cornell's online preservation tutorial created some time ago for Southeast Asia but includes many changes to more accurately reflect the special needs of the Middle East. 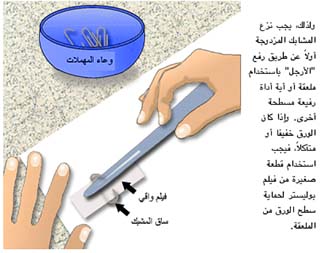 All the tutorials were written by John Dean, preservation and conservation librarian in the department, and illustrated by Carla DeMello of the library's Instruction, Research and Information Services (IRIS).

The Arabic tutorial offers approaches that can be carried out with limited resources. For example, Dean said, in the United States the standard way to deal with excessively hot and humid storage conditions is simply to install air conditioning. But this is not realistic in areas with limited availability of electrical power and expensive mechanical systems, so the tutorial describes other methods of climate control. Because the Arabic-speaking world represents a variety of climate zones, information on arid areas has been added to existing information on hot and humid areas, as this offers a more balanced view of climate in the entire region, from coastal areas to the interior. Included are specifics on the preservation of papyrus, parchment and clay tablets.

The goal, Dean said, is to provide resources for professional librarians in the Arabic-speaking world. "These people really know their stuff, but they don't know a lot about preservation," Dean said, adding that Cornell is one of the world leaders in preservation.

The tutorial was developed principally to assist the reconstruction efforts in Iraq, and at a preservation course Dean taught in Amman, Jordan, in July, librarians and archivists from Iraq reported that the Arabic tutorial would fill a much-needed niche for them in the literature of preservation.

Dean spends about two months every year overseas, mainly in Southeast Asia, helping to establish local preservation programs, surveying collection damage and, often, helping raise money for preservation projects. Much of his work is in accord with the needs of the Southeast Asia program at Cornell. "I spend most of the time working with people at the bench," he explained, "teaching them how to make decisions that affect their entire collections."

The need, he said, often arises from war or civil disruption, when collections are damaged or have been moved to storage to protect them. Restoring these bits of history is crucial to a nation's advancement, he believes. "You can't do school textbooks without the national library," he said. "These things are really fundamental to cultural life and economic development."

This fall Dean will travel to Indonesia to complete a three-year study on the effectiveness of hermetic sealing to preserve microfilm, in cooperation with the Image Permanence Institute in Rochester, N.Y.

The Arabic and Southeast Asia tutorials are available at http://www.librarypreservation.org. The work was done with the help of funding from the National Endowment for the Humanities, which is not responsible for any views or recommendations expressed in the tutorials.