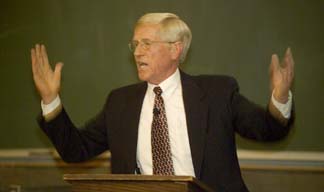 In the past half century, U.S. society has mutated into an impersonal, mechanistic and exploitive capitalist economy that "acts like a robot and functions like a cancer," poisoning our physical and mental well-being and exhausting the world's resources.

"Somewhere in our pursuit of health and happiness we have lost our way," said Ikerd, who is the author of a new book, "Sustainable Capitalism: A Matter of Common Sense" (Kumarian Press, 2005).

The seminar was sponsored by Cornell's Sustainable Food and Agriculture Systems for Healthy Communities Initiative, which is supported by 13 campus organizations.

Ikerd passionately argued to an audience of 250 people in 233 Plant Science Building for a new type of capitalist economy modeled on living systems -- capable of regeneration and renewal and ecologically sound, socially just and economically sustainable.

Since the fall of Communism, capitalism has been embraced around the world, even China, he said. But the United States, in its seductive pursuit of wealth, has developed and is spreading around the world a competitive, exploitive industrialized system that is dependent on fossil fuels, heavy metals, plastics and pesticides. While the United States extracts resources from the earth, it doesn't put anything back for future generations, he said. At the same time, the economic system, he insisted, has abandoned the importance of relationships and ethics.

The result, Ikerd said, is skyrocketing rates of cancer, asthma, diabetes, depression, suicide and health-care costs, a growing sense of malaise and a decline in connectedness to family, community and social networks.

"There has never been a society where people had such wealth. ... But wealth has not brought us happiness," Ikerd said, his voice rising in dismay. "To be happy, we need a sense of purpose and meaning in our lives … and it's not from materialism."

Ikerd urged young people (because, he asserted, older people are too invested politically and economically to change their minds) to reject -- before it's too late -- the neoclassical industrial paradigm of standardization, consolidation and specialization whose quest is to maximize profits, growth and materialism while using up resources. In its place, he said, the country needs to build a sustainable capitalist society whose goal is "triple bottom-line management" -- where the bottom line isn't economic but ecological and the management is driven by ecological integrity, social responsibly and economic viability. 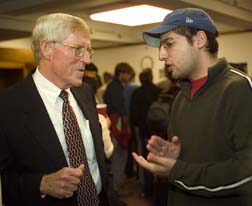 "Only then can we pursue individual self-interest in a way that is sustainable," he said.

What would be the single most important way to go about doing this? Passing a constitutional amendment that guarantees future generations the same rights as today. That would force the writing of new laws to ensure that everybody -- even the unborn -- has the right to a clean environment.

"We have the greatest opportunity to turn things around. … We have the means if we have the courage," he said.

The lecture was followed by a reception that included local and organic foods from around the region, coordinated by the GreenStar Cooperative Market. Following the reception, Dean Koyanagi, Cornell's sustainability coordinator, gave a brief overview of sustainability efforts on campus. For the Sustainability Summit, about 50 people then broke into seven focus groups, facilitated by professionals from Cornell's Department of Human Resources. The groups identified about 20 sustainable activities that the Cornell community should be pursuing. That list will be posted on the Sustainability Web site and feedback will be solicited.

Campus Sustainability Day at the other end of the calendar from Earth Day is devoted specifically to the achievements and challenges of sustainability in higher education institutions and their surrounding communities.