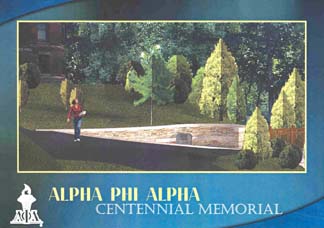 Provided
An architect's rendering of the Alpha Phi Alpha Centennial Memorial that is being built between Barnes Hall and the Cornell Store.

Alpha Phi Alpha, the nation's first Greek collegiate organization established by black students at Cornell in 1906, will prepare for its centennial with a pilgrimage to Cornell on Saturday, Nov. 19. The "2006 Centennial Celebration Kickoff" is expected to unite 700 to 1,000 fraternity brothers.

The fraternity, now open to all races, has more than 700 chapters whose values focus on scholarship, leadership and service. During the daylong pilgrimage, members will march across campus and unveil a new centennial memorial to Alpha Phi Alpha.

The event will begin at 8 a.m. in Statler Hall with the signing of a "Pilgrimage Book of Remembrance" followed by a tour of the campus. During an archival exhibit in Kroch Library, participants will view artifacts of the fraternity, including rare handwritten original minutes of the fraternity's Third General Convention, fraternal essays, photographs of the founding student members -- called the Seven Jewels -- and copies of their academic transcripts.

A silent march at 2 p.m. from Barton Hall will visit the site of the centennial memorial -- a wall in the form of a "J" in recognition of the Jewels; it has a bench and a plaque and is in front of Barnes Hall. There, a service will pay tribute to the founding members. An academic convocation will follow in Sage Chapel where Cornell students receiving fraternity scholarships will be recognized, and Robert L. Harris Jr., professor of African-American history and vice provost for diversity and faculty development at Cornell, will present the second Charles H. Wesley Memorial Lecture. The first Charles H. Wesley Memorial Lecture was presented by former U.S. Sen. Edward Brooke of Massachusetts. Charles H. Wesley was the third African-American to receive a Ph.D. from Harvard, was dean of liberal arts and the Graduate School at Howard University, president of Central State College of Ohio, national historian for Alpha Phi Alpha (a position that Harris now holds) and the longest serving president of the fraternity (1931-1940). A farewell reception will be held at the Herbert F. Johnson Museum of Art.

"A pilgrimage is a personal, spiritual, historic and significant journey, which one takes to a place and for a purpose that has profound meaning to that individual," Darryl R. Matthews Sr., general president of Alpha Phi Alpha, wrote in a letter urging members to participate in the event.

The founders of Alpha Phi Alpha came from very different backgrounds: four had attended preparatory school and three transferred from other colleges. Several experienced financial difficulties. They were united by their appreciation for music and passion for literature. Influenced by the teachings of such prominent leaders as Booker T. Washington, the fraternity originally served as a study and support group for black students facing racial prejudice on campus, both educationally and socially. All of the Jewels enjoyed success after they graduated.

Alpha Phi Alpha, which has been interracial since 1945, has many noteworthy alumni, including 1930s Olympic superstar Jesse Owens and Martin Luther King Jr. Approximately 125,000 men have been initiated into Alpha Phi Alpha since its founding. The fraternity's Ithaca-area alumni chapter, Iota Iota Lambda, is sponsoring the centennial celebration.

This is only the second pilgrimage of Alpha Phi Alpha members. The first, in 1956 to celebrate the 50th anniversary, drew about 1,000 members who traveled by chartered train from Buffalo to Ithaca.

Theresa D'Andrea is a writer intern at the Cornell News Service.