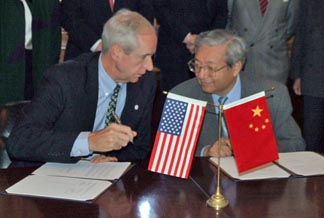 In a speech at Peking University, Rawlings said that the new China studies major will provide Cornell students with an international view. To understand any culture, the language must be mastered, he said. "American students are notorious for not learning other languages. This is a widespread problem and a serious shortcoming in American education," Rawlings said. "I am delighted that the CAPS program will help solve this problem for its majors by enabling them to learn one of the most important and long-lived languages of the world: Chinese." Specifically, the students will learn Mandarin.

Rawlings led a delegation consisting of faculty, staff and alumni to Beijing for the occasion. He applauded Michael Zak '75 for conjuring the idea of a new major; he noted the effort of Sherman Cochran, the Hu Shih Professor of Chinese History at Cornell and director of the CAPS program, for developing the idea into a curriculum; and he congratulated Chen Jian, the Michael J. Zak Professor of History for U.S.-China Relations at Cornell, for joining the faculty at a key time.

The weather was perfect for the academic partnership signing. Not a cloud punctuated the azure sky, the temperatures were in the upper 50s, and the breeze swept the shroud of Beijing smog downwind. 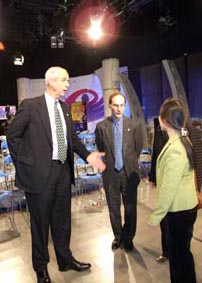 Blaine Friedlander/Cornell Chronicle
Cornell President Hunter Rawlings and David Wippman, vice provost for international affairs, talk to a Tsinghua University student at the CCTV Chinese television studios in Beijing. Rawlings was interviewed for a news program that will be aired Nov. 18 on CCTV-1.

Rawlings said the CAPS program breaks new educational ground. Not only does the major focus on language, culture, history, politics and foreign policy, but it requires a student to spend a semester in Washington, D.C., as well as Beijing. "I believe that its benefits go beyond the education of CAPS majors and even beyond the growing collaborative relations between Cornell and Peking University," Rawlings said. When science and technology are attracting much of the public interest and funding in both China and the United States, the humanities portion of CAPS fills a critical role, he noted. CAPS emphasizes that rigorous understanding of the arts, humanities and social sciences is also important for those who will be the leaders in the next stage of U.S.-China relations, he said.

Humanists, Rawlings reminded the Peking University audience -- largely students -- provide society with a greater depth of knowledge and understanding. "The humanists are also catalysts for change, as the humanities not only preserve our history and culture, but they also critique the dominant ideas in society and help us reshape and reformulate them in the light of present day experience," he said.

After the CAPS signing, Rawlings and part of the Cornell delegation traveled from Peking University to the China Television (CCTV) studios. There, the Cornell president and Gu Binglin, president of Tsinghua University, gave an interview to program host Bai Yansong that will be aired Nov. 18 on CCTV Channel 1. Students from Tsinghua and faculty from Cornell participated by asking questions, with most of the students' questions focusing on Cornell's admissions policies.

"This day was historic," said Rawlings during a dinner celebrating the partnership with Peking University. "Decades from now, we'll look back and see just how historic it was."