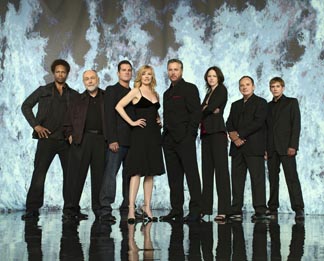 CBS
The much-praised ensemble cast of "CSI: Crime Scene Investigation." The No. 1 show on television today, it is produced by a talented crew led by the two Cornell graduates.

ITHACA, N.Y. -- What does it take to make a television show No. 1? About 28 million viewers and two Cornell graduates, among other things.

Carol Mendelsohn, A.B. '73, has been with the program since its first season in 1999-2000 and is executive producer and showrunner, essentially managing every aspect of the show and making ultimate decisions. She is one of the few women in the business with that level of responsibility.

Eleven years separate their time on campus and they were interviewed separately for this story, but one of their most memorable teachers turned out to be the same person, Walter LaFeber, now the Andrew and James Tisch Distinguished University Professor. His course in American foreign policy made a deep impression on both of them.

"He made you want to learn," said Mendelsohn. "He taught me how to look at and analyze things, how you frame the question." A seminar paper she wrote in his class "reaffirmed my love of writing and my soul of a poet."

Said Shankar: "I remember coming out of a fantastic lecture by Professor LaFeber on Aaron Burr and not wanting to go to my lab in Phillips Hall. That's when I realized I wasn't going to be an engineer. I was a generalist, not a specialist. Television is a good place for generalists."

He also was fascinated by Norse sagas in Cornell Library's Icelandic collection and by an English literature class on "The Lord of the Rings," which studied J.R.R. Tolkien's source material. The course was taught by a professor who been a classmate of Tolkien at the University of Oxford.

At Cornell, both Mendelsohn and Shankar were drawn to academic life in general. "I loved the life you could have in Ithaca," said Mendelsohn. And Shankar said his friends assumed he would end up as a teacher. Instead, each took different paths to mainstream television for different reasons.

Mendelsohn graduated at a time when there were few jobs in academia, so she went on to earn a law degree at George Washington University and became a lawyer in the Washington, D.C., area. She kept her poet's soul alive by taking writing courses and working on short stories, plays and TV scripts on the side. Finally, realizing that writing was what she really wanted to do, she quit her day job and moved to Los Angeles in 1982.

Television can be one of the hardest businesses to break into, but when she auditioned for one of her favorite shows, "Remington Steele," by writing a speculative script, she made it "a little different by having an elephant framed for murder," she recalled. That led to a job writing for the TV show "Fame" and working with producer Steve Cannell on a series of programs that included "Hardcastle & McCormick" and "Wiseguy." "I was so lucky. It was like getting into Harvard," she quipped.

Meanwhile, after completing his doctoral thesis -- on liquid crystal-based fiber-optic switches -- and graduating, Shankar took up an invitation to visit former classmates who were trying to break into the entertainment business in Hollywood. "I slept on their couch for a few weeks," he said. Then he got a Writers Guild of America internship on "Star Trek: The Next Generation," which led to a job as science consultant to the show and, eventually, as a writer for its last three seasons. Shankar, a sci-fi fan who had loved the original "Star Trek" as a child, said that working on the show "was a ton of fun and a great place to learn." That led to stints on such other shows as "Outer Limits," "Farscape" and eventually "CSI."

Mendelsohn joked, "Naren fits in well with all of us on "CSI" who are preoccupied with death and murder, and he brings his own warped sensibility to the show."

For those who have never watched "CSI," the main action takes place in a Las Vegas crime lab, where the show's much-praised ensemble cast solves murders by meticulously analyzing the physical evidence -- telltale fibers, DNA -- to determine what might have happened. Some of the scenes can be grisly, but all are done with great flair and attention to detail. "People love mysteries," said Shankar. "The show reinvented the genre. There's the satisfaction of getting the bad guy and of reaffirming the belief that, if you have good people who are objective and analyze the facts, you will eventually get to the truth."

Several years ago Mendelsohn and another producer on the show, Ann Donahue, were honored guests at a White House breakfast, along with other female showrunners, and they won special praise in a Writers Guild of America Web site article for creating strong female characters on "CSI." "I believe you can change the way people look at the world, without hitting them over the head, through the power of the pen," said Mendelsohn. "When you make a woman a judge, that says something. 'CSI' investigator Catherine Willows [played by Marg Helgenberger] can outkick any of the guys. Only by seeing strong role models, can girls realize that everything's possible."

The show also has a character, Dr. Albert Robbins, played by Robert David Hall, an actor who is a double-leg amputee. "The fact is that he was the best actor for the job and that's why he got the role," said Mendelsohn. "Since he joined the cast, he has broken barriers for disabled actors through his role and has proven they can be a part of an ensemble cast without playing their condition on screen."

Including Mendelsohn and Shankar, the show now has nine writers -- two of whom started as writers' assistants. Indeed, CSI has earned the reputation for nurturing young writers, despite the pressures to do otherwise in a fast-paced business known for battered writer's syndrome. "It's important to me because that's the way I was trained," said Mendelsohn, noting that helping new writers is a way to repay a debt to Cannell, Aaron Spelling and others she has worked with who nurtured her writing and producing talents.

Mendelsohn and Shankar typically put in 12- to 15-hour work days, during which they appear simultaneously to manage people, produce, review and fine-tune scripts and take them through production and post-production, talk with actors about their characters and with writers to "beat out" fresh story ideas and new scripts, meet with forensic experts, detectives and crime labs in Los Angeles and Las Vegas and take other research field trips to clarify procedures and garner ideas.

Work on the show's season begins in late May with the plotting of the year's 25 or so episodes. By mid-July filming begins, with a new script completed every eight days, and production that overlaps script development.

"TV production is pretty rough going," said Shankar. "It takes a lot of time to write and film."

"Once you start that train, it keeps moving," said Mendelsohn. "There's never an uninterrupted moment. It's like running a big corporation."

There is a break of about two weeks in May between the end of a season and the beginning of a new one -- the only vacation time either writer gets in the course of a year. But the effort is worth it, they both agree, because of the tremendous cohesiveness among cast, crew and the rest of the staff, even more than the final product.

"Sometimes I think the show is an excuse for us to be together," said Mendelsohn, adding: "Naren and I know we're doing something special. The show is not a single voice, it's really a collaboration. The whole is even greater than the parts. That's what makes me most proud."

"You're paid to make stories up, and then people shoot them and make them look cool," said Shankar. What could be better than that?

The program airs Thursdays at 9 on CBS.