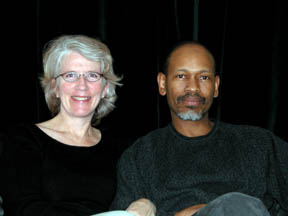 Provided
Pat Cassano, assistant professor of nutritional sciences, and Ron Booker, associate professor of neurobiology and behavior, are an interracial couple who have been together since she was 19 and he was 20 years old, about 31 years ago.

Interracial relationships and marriages are becoming more common in the United States, according to a new Cornell University study.

The number of interracial marriages involving whites, blacks and Hispanics each year in the United States has jumped tenfold since the 1960s, but the older individuals are, the less likely they are to partner with someone of a different race, finds the new study.

Although more young adults are dating and cohabiting with someone of a different race, the study found that interracial relationships are considerably less likely than same-race relationships to lead to marriage, though this trend has weakened in recent years.

To explore the changing patterns of interracial sexual relationships during the transition to adulthood, Joyner and her co-author, Grace Kao, associate professor of sociology at the University of Pennsylvania, analyzed data from the National Longitudinal Study of Adolescent Health and the National Health and Social Life Survey, some of the first nationally representative surveys to collect information on sexual relationships.

"Studying trends in interracial sexual relationships is important because intimate relationships between different racial groups are viewed as an indicator of the social and geographic distance between racial groups, and a barometer of race relations," said Joyner. Unlike other studies, which typically look at marriage or cohabitation and sometimes at current dating relationships, this study looked at trends in these relationships over a 10-year period.

The researchers found that among 18- to 25-year-olds in 1990 and in 2000, interracial sexual involvement became increasingly common, with the greatest increase seen in cohabitating relationships, followed by dating relationships and then marriages.

While Hispanic is an ethnic group composed of both racial and ethnic groups, Joyner, like many demographers, uses the categories -- non-Hispanic white, non-Hispanic black (or African-American) and Hispanic (or Latino) -- to measure race.

In Joyner's study, Hispanics had the highest rate of interracial relationships: 45 percent of 18- to 19-year-olds and 33 percent of 24- to 25-year-olds were in interracial relationships in the early 2000s, compared with blacks (20 and 14 percent, respectively) and whites (16 and 12 percent, respectively). While Asians appear to be comparable to Hispanics in terms of rates of interracial involvement, age patterns for Asians were not presented in the study, Joyner said, because there were so few within some of the age groups in the surveys.

"In the analyses we did run, however, it looks like involvement in interracial relationships increases with age for Asians," said Joyner.

"Although interracial relationships were far more common in the early part of this decade than in the mid-1990s -- about five percentage points higher -- they still decline with age," said Joyner, noting that the fact that many young adults' transition to marriage is also a factor in the age decline. The rate of interracial marriage, however, is still relatively uncommon: in 2002, only 2.9 percent of all marriages were interracial, according to the U.S. Bureau of the Census.

In a 2003 study, Joyner had reported that adolescents in interracial romances were significantly less willing to reveal their relationship to family and close friends than those in same-race relationships, suggesting that such relationships still do not receive whole-hearted approval by society.

The study was supported, in part, by grants from McGill University, Cornell, the University of Pennsylvania and the National Institute of Child Health and Human Development.