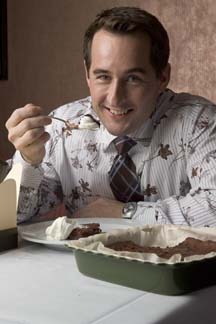 Serves 10-15 (depends on the appetite and sweet tooth of your guests!)

This has to be one of the easiest chocolate cakes to make. It takes all but 10 minutes to prepare, exactly 17 minutes to bake, but you need to let it rest at least 3 hours before serving. So best to make it in the morning and enjoy it with friends at dinnertime. This recipe will yield one large (lasagna dish-like) cake, you can cut the recipe in half for a smaller cake, if so then bake for 10 to 12 minutes.

Melt chocolate and butter in a double-boiler. Use a large enough bowl to be able to add other ingredients.

In separate bowl, mix eggs and sugar. Slowly add the egg mixture to the melted chocolate, mixing as you add. Then add sifted flour, mix well but do not over mix.

Pour in rectangular lasagna-like dish. I line mine with parchment paper that I spray with Pam, but you can simply grease and flour your baking dish and it will be fine. The parchment paper makes it easier and less messy to unmold the entire cake.

VERY IMPORTANT: Make sure to leave a generous amount of batter in the bowl. Half the fun is licking it – just like when you were a kid!

Bake at 425 degrees Fahrenheit for 5 minutes, then at 400 degrees for 12 minutes. Do not let the cake overcook. IMPORTANT: Do not cut the cake when it is first coming out of the oven: at this point the center is still all liquid!

Remove and let cool for at least 3 hours before serving – this can easily be made the night before.

For a slight twist: pour half the batter in dish, then spread a thin layer of marmalade or raspberry jam over the batter, then pour the remaining half of the batter.

Serving tip: you can serve with whipped cream. I like to serve mine with Bing cherries (canned) stewed for about 30 minutes with a bit of sugar, a cinnamon stick, and a split vanilla bean (remove cinnamon and bean before serving).

Picture your grandmother's homemade applesauce – or a steaming cup of cocoa with marshmallows – or a double-dip super fudge chunk ice cream cone with rainbow sprinkles. Comfort foods all, but equally so to men and women?

A new study from a Cornell University professor and two colleagues shows that while women comfort themselves with such foods when they are feeling down in the dumps, men indulge as an enhancement when they are feeling their best. The findings may lead to a better understanding about food choices that lead to weight gain or, conversely, promote a healthy lifestyle.

Said study co-author, Jordan L. LeBel, associate professor at Cornell's School of Hotel Administration: "In the past comfort food was considered primarily as a strategy to alleviate stress, sadness and other negative emotions. Ensuring emotional well-being is still the goal, but pleasure and positive emotions can also determine food choice, especially in men."

A study by LeBel and his co-authors, Laurette Dubé, professor of consumer psychology, and Ji Lu, a Ph.D. candidate, both of McGill University, "Affect Asymmetry and Comfort Food Consumption," has just appeared in the journal Physiology & Behavior (Vol. 86, No. 4).

While the study confirms that comfort foods can be effective in alleviating negative emotions, the authors show that they can also enhance positive ones -- but not for everyone. Men and older adults were more likely to report higher positive emotions after eating their favorite comfort foods than women and younger adults. The study also showed that for women particularly, comfort foods can produce feelings of guilt.

LeBel, who is French Canadian and an expert on one essential comfort food – chocolate – recommends his recipe for half-baked (molten) chocolate cake as a cure-all for negative emotions and an enhancer of positive ones.

The study's findings were drawn from the results of a Web-based survey completed by 277 participants.