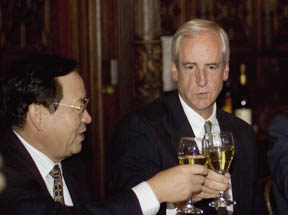 Cornell University President Hunter R. Rawlings will be heading to China Nov. 14 for a four-day trip to Beijing. He plans to sign an official partnership agreement with Peking University (formalizing Cornell's newest academic major, China and Asia-Pacific studies, or CAPS), deliver a keynote address at the 2005 Beijing Forum and participate in an engineering workshop with Tsinghua University.

Rawlings and Peking University President Xu Zhihong will sign the agreement Nov. 15 in Beijing, cementing the CAPS major. It was just over a year ago that former Cornell President Jeffrey Lehman and G. Peter Lepage, dean of Cornell's College of Arts and Sciences, signed a memorandum of understanding with Peking University to create the major and a collaborative agreement between the universities.

The CAPS major was developed in recognition of China's phenomenal economic growth over the past three decades and the need for a deeper understanding of China and its relations with the United States. Three years ago, Cornell alumnus Michael Zak '75 met with Rawlings to outline an idea that was quickly embraced by key faculty members at Cornell. History Professor Sherman Cochran then designed the CAPS major, endowed by Zak, which requires three years of intensive study of Mandarin Chinese before a student's senior year, as well as study in Washington, D.C., and in Beijing. It became the first Cornell major to require coursework off campus and overseas.

CAPS majors in Ithaca study China's history, politics, society and foreign relations, especially with the United States, and also take Chinese language courses either in the regular curriculum or in Cornell's FALCON (the Full-year Asian Language Concentration) -- the only language program in the United States that allows students to study Chinese all day, every day, year-round.

Students then work in Washington, D.C., to complete a core course seminar on U.S.-China relations while interning with diplomats, businessmen, journalists, educators and other professionals.

Justin Long '08, one of the first three Cornell students to declare a CAPS major, has taken two years of Mandarin. He wants to hit the ground running: "If I were to take a standard Asian studies major, it would be more difficult to incorporate the off-campus work I am doing, and the internships would be unavailable," he said. "Also, CAPS stresses the achievement of high levels of competence in the Chinese language. I am most looking forward to my time in Washington and Beijing."

On Nov. 16, Rawlings will deliver one of three keynote addresses to the 2005 Beijing Forum, a scholarly economic and cultural summit in China hosted by Peking University and the Korea Foundation for Advanced Studies.

More than 300 scholars at the forum from around the globe will focus on "The Harmony and Prosperity of Civilizations: Asia's Opportunity and Development in Globalization." Rawlings' keynote address is titled "The Modern Research University: Intellectual Innovator and Cultural Bridge."

On Nov. 17 in Beijing, Rawlings and Tsinghua University President Gu Binglin will open the first Cornell-Tsinghua engineering workshop as part of an academic exchange agreement signed last year by the two universities.

For years, Cornell and Tsinghua have been exchanging graduate students. Kent Fuchs, dean of Cornell's College of Engineering, said that this agreement will expand that long-time relationship to include undergraduate students and faculty.

Those from Cornell presenting at the forum will include: