Thelma Schoonmaker '61 envisioned a career in international relations after she left school. But she was turned down for a job at the State Department ("I took a stress test and they said I was way too liberal in my thinking"). And then she answered an advertisement in The New York Times to train as an assistant film editor.

"You'd never see an ad like that today; editors ask other editors for recommendations," Schoonmaker said at a tribute held in her honor Nov. 19 in Cornell's Willard Straight Theatre. "It was a terrible old hack who was butchering Fellini and Rossellini films for late night television." 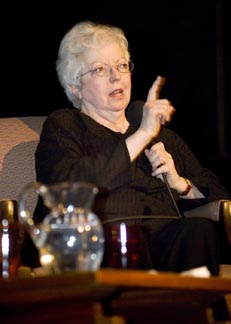 But she was not a stranger to the arts. When she was at Cornell from 1957 to 1961, "it was a time of real ferment. Poetry was exploding, films were exploding, art was exploding."

The work as an assistant film editor inspired her to take a six-week summer course in film editing at New York University. In a true instance of right place, right time, she met Martin Scorsese, who desperately needed help cutting his student movie -- and thus began a 40-year collaboration that has earned them several Academy Awards.

Schoonmaker has Oscars for "Raging Bull" (1980) and "The Aviator" (2004) and Oscar nominations for her work on two other Scorsese films, "Gangs of New York" and "Goodfellas." After Schoonmaker presented a program of film highlights, Cornell Cinema director Mary Fessenden interviewed her onstage and read questions from the audience.

"He was very intense in those days, very driven," Schoonmaker said of Scorsese. "He came from a very depressed background; his parents were pressers in the garment district. They gave him their life savings to make his first film. They worked on the set of 'Goodfellas' -- they were the only ones who could press those outrageous Mafia collars."

When she met him at NYU, Scorsese had been working for days, trying to recut his film from the negative.

"And I, because of this terrible job that I had, knew how to cut negative," she said. "If I had missed that major connection, I might have become a housewife at the time."

Schoonmaker is the widow of British director Michael Powell, and she is currently working in between Scorsese projects to promote and preserve Powell's legacy, including curating a recent program of features at Cornell Cinema to mark the centennial of his birth. Seated on stage and using a DVD projector, she showed many clips from movies Powell made with writer Emeric Pressburger, including an elaborate build-up to a duel in their early Technicolor film "The Life and Death of Colonel Blimp," the windswept North Sea island setting of Powell's "The Edge of the World," the racy "Black Narcissus" and 1948's "The Red Shoes," a fever dream of a film that Scorsese has cited as a major influence on his own movies. Schoonmaker also hopes to edit Powell's letters and diaries for future publication.

"Powell and Pressburger are still not well-enough known, as much as I'd like them to be," she said.

She also showed scenes from "Raging Bull," which she said almost didn't get made; Robert De Niro had been training throughout the late '70s to play boxer Jake LaMotta, and the actor kept pressing Scorsese to make the picture until the director finally relented. Schoonmaker pointed out the film's innovative use of sound, including the sounds of elephants and horses during the fight sequences, and the improvisations between De Niro and co-star Joe Pesci.

"They were beautiful to watch," she said. "It was a remarkable film to work on. Everyone was working at the peak of their abilities. Marty [Scorsese] saw every boxing film, and his big decision was to have the camera in the ring."

Schoonmaker also marveled at her close collaborative relationship with Scorsese over the past four decades.

"There's a lot of trust. My taste is his taste, really," she said. "He also thinks like an editor when he's writing and directing. Being in the editing room with Marty is not only one of the greatest film courses there is -- because he always has TCM [Turner Classic Movies] on -- but just his musings and the emotions he goes through."

Scorsese is the ultimate movie lover, she said. Even at his busiest times, he watches a film a day and two on Saturdays. Addressing the audience, she stressed: "If you're a student here and want to be a filmmaker, please look at older films. Particularly black-and-white films."