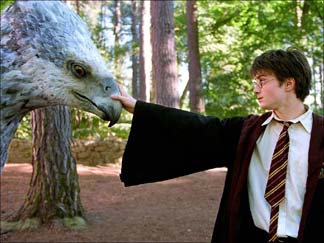 Warner Brothers Entertainment Inc.
Macaulay Library provided sound files of the screech of a limpkin to give voice to the winged hippogriff in the 2004 movie "Harry Potter and the Prisoner of Azkaban."

When sound editors needed the twitterings, hoots and songs of a chiffchaff, burrowing owl, European robin, song thrush, common nightingale and rooks at a rookery for "Harry Potter and the Goblet of Fire," they called on Cornell's Macaulay Library at the Lab of Ornithology -- home to the world's largest collection of natural sounds. The library contains some 165,000 audio recordings, together with a growing archive of wildlife video.

For example, the makers of the Harry Potter movies contacted the Macaulay Library in the eleventh hour of production for "Harry Potter and the Prisoner of Azkaban," released in 2004. They needed an appropriate call for the film's mythical hippogriff, a creature with an eagle's head, horse's body, large beating wings and ostrichlike feet.While readers will need to see the film -- released Nov. 18 -- to pick out which sounds were used, the library has become an increasingly popular resource for moviemakers. Sound editors for such movies as "The Incredibles," "Harry Potter and the Prisoner of Azkaban," "Raiders of the Lost Ark" and "Mosquito Coast" all have used nature recordings from Cornell to enhance their soundtracks. In the process, the Macaulay Library has established itself as more than just a vast scientific resource but also as a repository for creative but realistic background sounds.

In 2004, Skywalker Sound, the audio arm of George Lucas' movie production company Lucasfilm Ltd. in Marin County, Calif., asked for unusual jungle sounds for the animated feature "The Incredibles" to accompany Mr. Incredible's arrival on Nomanisan Island.Greg Budney, curator of audio at the Macaulay Library, came up with the screech of a limpkin, a swamp-wading bird with long legs and long curving beak that lives mainly in Florida, the Caribbean islands and Central and South America. And so, in the "Prisoner of Azkaban," the hippogriff swoops down and lets out the prehistoric-sounding screech of a limpkin.

"The idea was to try and find some unusual bird sounds that would lend an exotic feel to the Nomanisan Island," said Will Files, an assistant sound director at Skywalker Sound. "The visuals looked pretty different compared to the average jungle, so we wanted the sounds to add a tropical vibe."

Macaulay Library staff sent sounds of a mealy parrot, an olive-throated parakeet, a laughing kookaburra, a military macaw and a Puerto Rican parrot. They all found their way into the jungle scenes.

"Our needs were more based on aesthetics than realism, since this was a fictional place, we didn't have to be realistic," Files added.

In the past, Hollywood was notorious for using out-of-context sounds for atmosphere. For example, it became a cliché to use the "koo-koo-koo-koo-koo-kaa-kaa-kaa" call of the laughing kookaburra, a bird endemic in eastern Australia, to represent African jungles in adventure movies of the 1940s and 1950s; the call was humorously referenced a few times in the movie "Raiders of the Lost Ark," a spoof of the genre. In another example of audio inaccuracy, the movie "Out of Africa" used sounds from the New World tropics to represent the African savannah. 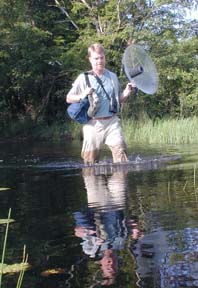 Eduardo E. Iñigo-Elias
Greg Budney, curator of audio at Macaulay Library, records bird sounds in a swamp in Zapata, Cuba, in 2002, for the library's collection.

Today, Budney said, moviemakers are trying more and more to use sounds that truthfully represent a place. "We are seeing an increase in people wanting to get it right in the industry. It takes the art a step forward to create an accurate acoustic portrayal."

Take the upcoming New Line movie, "The New World" (release date Dec. 25), about the arrival of Europeans to the Americas and the love story of Pocahontas and John Smith. The film aims to recreate the wild continent and what Jamestown was like in early 1600s Virginia.

"This movie may represent one of the finest natural history soundtracks ever produced in a feature film," said Budney, who worked with director Terrence Malick's staff for a year collecting sounds for many different scenes, from familiar sounds of robins and thrushes and various kinds of frogs to the less familiar sounds of owls at night and red wolves.

"In the 17th century, the choruses of birds and frogs would have been the dominant sounds that greeted European settlers, sounds unfamiliar to their ears and on a scale long gone from developed England. Choruses of frogs and birds in the spring would have been stunning," added Budney. "We don't have sounds of that, but we do have all these recordings that are just little postage stamps of the whole." Malick attempts to piece together the individual sounds to achieve his vision of a 17th century America where nature dominated.

Once studios spent millions on the footage for a movie and just a few thousand dollars for sound effects. Now "studios are spending more [for audio] because the public is more discriminating and today's sound designers are committed to taking their craft to a higher level," Budney said.

The Macaulay Library is in the process of digitizing its entire collection, and expects to have its holdings available online within the next six months.