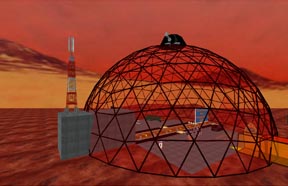 Imagine it is the year 2045 and the ground glows an eerie orange-red. Inside the Schenectady Mars High School, robots patrol the hallways, careening around corners on one wheel. The high school perches on the edge of Gusev crater, where the first Mars Exploration Rover, Spirit, landed in 2004. The school's Galileo Hall is decorated with some earthly vegetation, and a monthly shuttle back to Earth docks at the Sir Isaac Newton Transportation Station.

This virtual world was created by students at the Math, Science and Technology House of Schenectady High School in an after-school program affiliated with the Cornell Theory Center's (CTC) SciFair educational outreach program. The program is a chat room and virtual game environment that pairs two Cornell student "mentors" with one or two teachers at each of six schools across the nation and one in Singapore to help about 200 middle and high school students research, design and build virtual worlds.

"SciFair worlds that have been created range from an expansive set of mazes filled with quizzes and surprising facts about the tropical rainforest to an elegant world created by students on the Quinault Indian Reservation in Taholah, Wash., that includes slide shows and a multimedia gallery about tsunamis," explains Margaret Corbit, director of SciFair, now in its third year, and CTC's SciCentr, an open online museum that offers collaborative environments and games to attract teens to science and simulations. 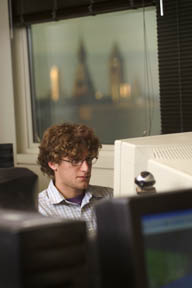 Other SciFair worlds have included a human genome project inside a giant human figure, created by students in Richmond, Va.; a manned mission to Mars to rescue the rovers, designed by students in Island Park, N.Y.; and music environments depicting the solar system, dinosaurs and the science of music, designed by teens in Spencer, N.Y.

To mentor these groups, about 18 specially trained Cornell students, who are paid for their service, log in from Ithaca to work with the teens and coaches online in the virtual world's collaborative environment.

"SciFair mentors range from first-year students to master's candidates and can have any major," says Corbit. They share an interest in working with teens and a willingness to take on the technical and social challenges of the program, she adds.

"One of the best parts of being a mentor is seeing the imaginations and creativity that the students have in building their worlds. It is absolutely amazing," says Anthony Jarc '06, a mechanical and aerospace engineering major in his second year on the job. "Mentoring has improved my own communication skills by making me more aware of being clear and concise when explaining difficult topics over chat [rooms]. And in addition to learning all about the research topic the school chooses, I have learned how to help students and be a positive influence."

Training includes an introduction to the technology used, basic digital workplace skills and ways to look at group dynamics and team support. More than half of the mentors each semester return to the program and work throughout the year with the support of CTC's research outreach staff. Once trained, the mentors first help the SciFair teams master the new medium and colonize a small piece of cyberspace while learning about the design of game interaction. The mentors help their students research, design and create a "knowledge space" that focuses on a particular issue. The teams then share their exhibit online with peers and educational professionals from other schools.

"The beauty of the technology is that the worlds come to life through the joint effort of the team while they are logged into the worlds; the building process can be likened to working with virtual Legos to build a sort of Sim City," says Corbit, referring to the computer game that allows users to build cities.

"Being a mentor helps me learn to work with others in a different way than I had previously as a mentor," says Ashley Zydel '09, majoring in biology. "I love getting to work with kids, which is an opportunity that doesn't come along often. The best part of being a mentor is getting to do something worthwhile that is still fun and different."

Funding for SciFair comes primarily from Cornell and the GE Foundation, with additional support from Microsoft, Autodesk and participating school districts.