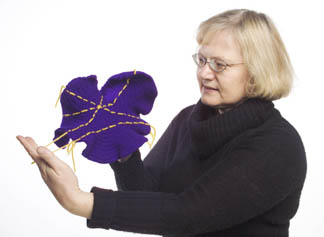 They could be fluttery sea vegetables or whimsical Victorian fashion accents. (Funny doll pantaloons, maybe?) Or even models of the curly parsley that Cornell mathematician and visiting scholar Daina Taimina grows in her backyard.

If Taimina's crocheting reminds you of any of those things, you're on the right track.

But Taimina doesn't spend hours upon hours with crochet hook and yarn in her fingers out of mere whimsy. She has a point to convey -- and it's about one of the most-difficult-to-grasp concepts in geometry: the hyperbolic plane -- think of curved space, or, as some have put it, the opposite of a sphere.

In other words, these creations -- and Taimina has stitched dozens, some as small as a baseball, others as big and unwieldy as a respectably sized stingray -- are much more than just pretty things to play with.

Then again, their appeal comes from their beauty -- and from the fact that they invite being played with. Once picked up, they are hard to put down. How many math teaching aids can claim that?

It was in 1997 that Taimina, whose Latvian schooling included crocheting and knitting along with the standard academics, first considered the medium to illustrate the hyperbolic plane to students.

Since then, her artistic crocheting, for which she has received a grant from the Institute for Figuring in California, has earned recognition from mathematicians, artists, educators and even fine art collectors, and has been shown in art exhibits in Washington, D.C., and Los Angeles. And Tuesday night it was the topic for a fascinated audience at the Science Cabaret in downtown Ithaca.

It all goes back to the math, though. The concept, investigated rigorously at Cornell by professor of mathematics William Thurston and not describable by an equation, creates all kinds of unexpected and non-Euclidian possibilities. Triangles whose interior angles add up to zero, for example. Or parallel lines that diverge.

In the hyperbolic world, says Taimina, "our intuition can be misleading."

"But now you can see it; explore it," she says. She offers one of her pliable, weirdly intriguing creations for hands-on scrutiny -- tracing the white stitching she has used over colored yarn to show how parallel lines can, in the hyperbolic world, diverge.

"Go with your finger," she invites. "Investigate."