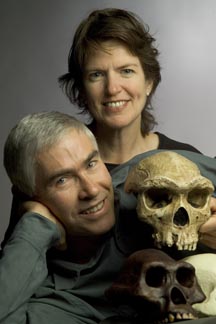 After teaching seminars on Darwinian medicine (Neurobiology and Behavior 420 this semester) for more than a decade, Sherman, professor of neurobiology and behavior and a Weiss Presidential Fellow, has developed such insights into the workings of the human body and why things are the way they are. They are quite counter, he says, to the idea of intelligent design -- the controversial idea that some things in nature are too complex to be explained by natural selection and, therefore, must be the work of a deity -- an intelligent designer.

"As soon as you begin to look at our bodies from an evolutionary perspective you see more and more we are not intelligently designed," said Sherman. For example, he pointed out that no engineer would design our throats with a windpipe that crosses the tube where food passes. "If you were going to design this to eliminate choking you'd probably put your mouth in your forehead or your nasal opening in your throat. It [the human body] is as one would expect from random mutations of previously existing structures and selection over eons."

Sherman co-teaches his Darwinian medicine seminar with his spouse, scientist Janet Shellman. Their aim is to give premedical and preveterinary seniors insights into how human evolution can inform a traditional medical education. Sherman is careful to point out that he is not teaching an alternative to medicine but, rather, an approach that questions which symptoms the body has acquired because they are useful adaptations and which truly are pathologies.

For example, a mild fever between 99 and 102 degrees is often the body's natural response to infection. Studies show that a mild fever leads to faster recovery times for infections and illnesses by reducing how fast a pathogen can reproduce and by boosting the body's immune response. And animals generally use fevers to fight infection -- including even those that cannot internally control their heat, like lizards, snakes, insects, salamanders and birds, which seek out sunlight or a warmer place when ill. With this knowledge, if conditions are right, a doctor may suggest riding out a mild fever as the most expedient cure for an illness.

The Darwinian medicine approach "takes every symptom and asks whether it is pathological or the body's adaptive response," said Sherman. The approach questions, for example, if a common cough is serving to rid the body of infection or if it is instead a mechanism by which the disease spreads itself. "People are only now beginning to ask these kinds of questions. We are really only at the dawn of this kind of approach."

Similarly, such questions may help explain a phenomenon like morning sickness, once thought of as a sign of a pregnant woman's ailing body. Now the view is that heightened nausea and vomiting in the first trimester of pregnancy protects against miscarriage caused by ingesting foodborne bacteria in spoiled meats and potentially hazardous chemicals in certain smelly vegetables -- although this adaptation would seem anachronistic in an age of refrigeration.

"As an evolutionary biologist, I apply this kind of thinking to every problem," said Sherman. "The idea of bringing it into the medical curriculum is new and exciting. There are presently no departments of evolutionary medicine, but there ought to be." Sherman added that a smattering of biology professors around the country teach similar courses.

He noted that a Darwinian medicine approach adds to the doctor's toolbox to offer a wider range of treatments, including advising a patient in some instances to help the body's evolved system do the healing.

"The promise of Darwinian medicine is that it may lead to even better-informed medical practices in the 21st century, because in order to fix something it generally is useful to know what it is supposed to do in the first place," Sherman said.