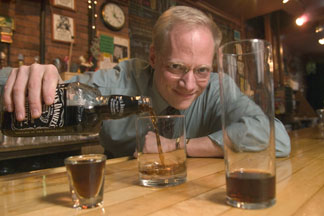 Jason Koski/University Photography
Cornell Professor Brian Wansink's study showed that people overpour into short, squat glasses by 20 to 30 percent, compared with tall, thin glasses, probably because of the vertical-horizontal optical illusion that people consistently perceive vertical lines as longer than horizontal ones of the same length.

When pouring liquor, even professional bartenders unintentionally pour 20 to 30 percent more into short, squat glasses than into tall, thin ones, according to a new Cornell University study.

"Yet, people who pour into short, wide glasses consistently believe that they pour less than those who pour into tall, narrow glasses," said Brian Wansink, the John S. Dyson Professor of Marketing, Applied Economics and of Nutritional Science at Cornell. "And education, practice, concentration and experience don't correct the overpouring."

The reason for the difference, Wansink speculates, is the classic vertical-horizontal optical illusion: People consistently perceive equally sized vertical lines as longer than horizontal ones.

"People generally estimate tall glasses as holding more liquid than wide ones of the same volume," Wansink said. "They also focus their pouring attention on the height of the liquid they are pouring and insufficiently compensate for its width."

The study, by Wansink and Koert van Ittersum, assistant professor of marketing at Georgia Institute of Technology, is published in the newest issue of the British Medical Journal.

In separate studies, the researchers asked 198 college students (43 percent female) of legal drinking age and 86 professional bartenders (with an average six years experience -- 38 percent of them female) to pour a shot (1.5 oz.) of spirits into either short, wide tumblers or tall, thin highball glasses.

The college students consistently poured 30 percent more alcohol into the short glasses than into the tall, and the bartenders poured 20 percent more.

Because people generally consume most -- about 92 percent -- of what they serve themselves, the issue of pouring accuracy is relevant to policy-makers, health professionals, consumers, law enforcement officials and alcohol addiction and abuse counselors, write the authors. For example, they note, the hospitality industry wants to control serving sizes and thus costs, those in public policy want to minimize waste, and health professionals want to discourage overconsumption.

Advice from Wansink for bars and restaurants and for those who don't want to unintentionally drink too much: "Use tall glasses or glasses with alcohol-level marks etched on them." For parents? Use tall, thin glasses when pouring soda but short, wide glasses for milk and other healthful drinks.

Wansink, the author of the new book "Marketing Nutrition: Soy, Functional Foods, Biotechnology and Obesity," is also the director of the Cornell Food and Brand Lab, made up of an interdisciplinary group of researchers who have conducted more than 200 studies on the psychology behind what people eat and how often they eat it.