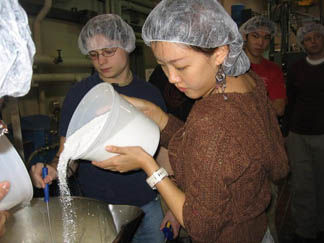 Madeline Giscombe
Voraya Satitpatanaphan '09 adds sugar that is mixed with corn syrup to a vat of heated milk to sweeten the ice cream base.

It is close to midnight and students cramming in the library are dozing off. How about a scoop of Sloppy Slope Jolt -- the winner of this year's ice cream-making competition in Cornell University's Food Science 101 class? It delivers a punch of caffeine in a tasty package.

The assignment for the class was to develop an ice cream flavor reminiscent of a Cornell campus landmark, such as a building or natural feature. "The ice cream had to have a strong and credible connection to the landmark," said Joseph Hotchkiss, professor and chair of food science at Cornell, who has been teaching students how to create complicated foods, including ice cream, since 1995.

The landmark referenced by the winning entry is Cornell's "Libe Slope," a steep hill below Uris Library, where students enjoy views of Cayuga Lake and party on "Slope Day," the last day of the spring semester's classes.

"Sloppy Slope Jolt is a mixture of the indulgence of Slope Day and the caffeine-filled study sessions that all Cornell students partake in at the libraries," said winning-team member Samara Fetto, a senior majoring in textiles and apparel with a focus in marketing and management. "The ice cream itself is a coffee-flavored base infused with swirls of caramel and fudge with bits of crushed hazelnuts mixed in. Decadent pieces of fudge brownies and hazelnut chunks are also mixed in to complete the delicious medley of flavors. The caffeine boost is a result of the coffee infused into the ice cream." 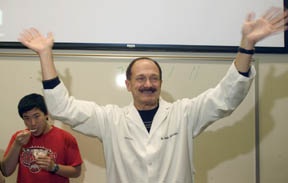 Jason Koski/University Photography
Professor Joseph Hotchkiss, chair of the Department of Food Science, assigned his class the task of developing an ice cream flavor reminiscent of a campus landmark.

The flavor won by a small margin over Rawlings' Green, a "playful" mix of crème de menthe-flavored green ice cream with cookie bits and fudge (to look like mud) and marshmallow (for snow) swirls, and Lynah Faithful, a white mint-flavored ice cream (for a "cool wintry taste") with chocolate disks (for hockey pucks) and colored-sugar fish (reminiscent of the Harvard game).

"The deciding factor was the overall impression category, which won the day for Jolt," said Hotchkiss, noting that the judges thought the flavor also had the best chance for success.

"The students did an unbelievable job in selecting sites that are recognizable by students, staff, townies and alumni," said Dave Brown, a senior extension associate in food science, who has served for years as an ice cream judge for the course and has run the labs when the students made their ice cream. "Did any flavor stand out? I would have to show my bias that Slippery Slope Jolt used two of my favorites: coffee and hazelnut."

The Cornell Dairy, which produces about 18,000 gallons of ice cream a year, will now produce Sloppy Slope Jolt to sell on campus next year and to serve in Cornell dining halls, said Vincent Nykiel, general manager of the Cornell Dairy and pilot plant. "It may take the Cornell Dairy eight to nine weeks to properly translate the winning formula from a test batch to a production run, as finding ingredients and properly formulating them often is a lengthy process." 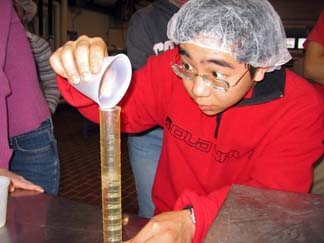 While developing an ice cream may seem to be a simple matter, it is, in fact, a complicated endeavor. In three teams of about 20 students each, the class must research ice cream flavor names, formulas, butterfat content, proportions and potential market for the product, as well as learn the technical aspects of commercial food processing for ice cream, such as how much milk-fat content would be acceptable to the discriminating palate, how much overrun (the air content) to introduce and how much particulate (crunchy tidbits) to use.

"What we do in the course -- bringing in some 60 years worth of expertise to consult on ice cream development -- would cost other pilot plants from $3,000 to $6,000 a day," said Hotchkiss. "It takes three technicians and quite a bit of money in materials to offer this course, which has grown from 12 students 10 years ago to 60 this year, our biggest group yet."

Although most contest-winning flavors fall by the wayside after a year or so, the flavor Sticky Bunz, developed in 1998, was so successful that many ice cream companies have copied it nationally, Hotchkiss said. Still sold at the Cornell Dairy Store, Sticky Bunz is vanilla ice cream with pecans, caramel and dough pieces with cinnamon and other spices. "It tastes much like the baked buns that are covered in nuts and caramel that you would get in a bakery," he added.

"Where else in the world can college students study the food science and art of ice cream making?" asked Fetto. "I am very appreciative of Ezra Cornell's motto 'any person, any study.'"