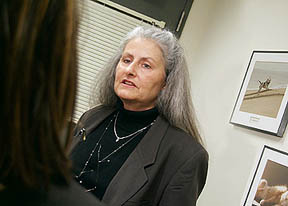 Alexis Wenski-Roberts/Cornell University
Dr. Sharon Center, professor of veterinary medicine, specializes in liver function and disease and is overseeing the treatment of the affected dogs.

At least 14 dogs from the Rochester area have suffered liver damage and several have died after eating commercial dog food contaminated with a fungal toxin, according to veterinarians at Cornell University's Hospital for Animals at the College of Veterinary Medicine, where seven dogs are being treated for food poisoning.

Diamond Pet Foods, the dog food manufacturer, has issued a product recall for all foods from the contaminated lot. (For further information, see http://www.diamondpet.com/.) The first poisoning case was reported Dec. 13.

Veterinarians at the Mendon Village Animal Hospital, in Mendon, N.Y., first noticed a link between the sick dogs and contaminated food. After the dogs began dying, three of the bodies were sent to Cornell's Animal Health Diagnostic Center (AHDC) for necropsies that revealed a common cause of death in dogs related to liver damage. AHDC toxicologist Karyn Bischoff conducted tests on food consumed by all the infected dogs, revealing the presence of aflatoxin, a deadly substance produced by fungus (Aspergillus flavus and A. parasiticus) that leads to severe liver damage if ingested. The fungus can grow on maize and many nuts, including peanuts, walnuts and pecans. 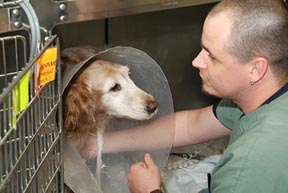 The New York State Department of Agriculture and Markets notified Diamond, which released a statement warning consumers to check lot numbers to determine if their dog food was produced at the company's Gaston, S.C., plant.

Cornell veterinarians advise dog owners who suspect that their dog has eaten the contaminated food to contact both their veterinarians and Diamond through their Web site contact form.

Owners should watch for signs of poisoning. These include lethargy, loss of appetite, vomiting and jaundice indications, such as yellowing eyes and gums. Severely affected dogs can produce blood-tinged vomit or stools. Dogs can take several days to exhibit serious signs of illness. Even if dogs shown no signs of illness, if they have eaten the affected food, they should have liver function tests and blood tests, which can detect liver injury and clotting problems.