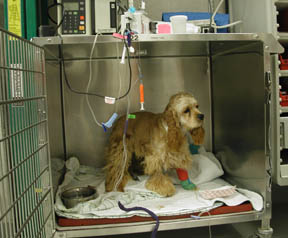 Even though Diamond, Country Value and Professional brand dog foods have been recalled for containing highly toxic aflatoxins, they have caused an estimated 100 dog deaths in recent weeks, say Cornell University veterinarians, who are growing increasingly alarmed. Some kennels and consumers around the nation remain unaware of the tainted food, which may have been shipped to more than two dozen countries, and as a result, they continue to give dogs food containing a lethal toxin.

To better screen affected dogs so they can be treated as soon as possible, Cornell veterinarians report that they now have a new test, adapted from one used in humans, to accurately assess aflatoxin poisoning in dogs (see companion story). Currently, about two-thirds of dogs that show symptoms after eating the tainted food die.

"Entire kennels have been wiped out, and because of the holiday these past few weeks, the dispersal of recall information was disrupted," says Sharon Center, a professor of veterinary medicine who specializes in liver function and disease at the College of Veterinary Medicine at Cornell, which is emerging as a central clearinghouse for information about the dog food poisoning.

The Cornell Vet College is continually updating its Web site to keep the public and veterinarians informed as new information on the poisonings emerge. Cornell's Animal Health Diagnostic Center (AHDC) is analyzing blood and liver samples from sick dogs around the country, testing suspected dog food, conducting autopsies and collecting as many livers as possible from dead dogs to confirm cause of death, tracking dogs that have died and following up on the health of dogs that survive the food poisoning. The AHDC has information for veterinarians on its Web site http://diaglab.vet.cornell.edu/news.asp.

"We suspect that dogs have been dying since November, perhaps even October, but it took the perfect storm of circumstances to get the diagnosis," said Karyn Bischoff, the veterinary toxicologist at Cornell who first identified aflatoxin as the culprit in the recent wave of deaths.

Trying to save dogs

Over the recent holiday weeks, Center and her staff worked around-the-clock to try to save the 17 poisoned dogs admitted to Cornell's Hospital for Animals. "I've been working with liver disease in dogs for 30 years, and I've never seen such miserably ill dogs," said Center, noting that severely affected dogs suffer from intractable vomiting and internal bleeding. "Despite our understanding of this complex toxin, we have no direct antidote for this poisoning. This has been an immensely sad holiday and one that will leave an indelible mark on the owners that lost their cherished family members."

Of those 17 dogs, Center euthanized 12 when it became clear they could not survive, and the remaining four were released, though the Vet College continues to treat new cases. Dogs that have survived consumed a smaller amount of the food than dogs that died, Center said. "Some dogs were stealing food from the kitchen counter. Others just stopped eating the food and begged for treats. Unfortunately, some owners used gravy and other mixers to entice their dogs to consume what they thought was safe, quality dog food."

Although only about two dozen animal deaths have been officially linked to the tainted pet food, Center and Bischoff know that many more have died or become ill from the tainted food, based on their many communications with veterinarians as far south as Florida.

"Every day, we're hearing reports from veterinarians in the East and Southeast who have treated dogs that have died from liver damage this past month or so," said Center. "We're also concerned about the long-term health of dogs that survive as well as dogs that have eaten the tainted food but show no clinical signs." She suspects that surviving dogs may develop chronic liver disease, perhaps liver cancer, and that many dogs that ate the tainted food appear healthy are nevertheless victims of liver damage.

Yet many dog and kennel owners remain unaware that some 19 brands of Diamond, Country Value and Professional dog foods have been recalled.

Early signs that a dog has been poisoned by aflatoxin include lethargy, loss of appetite and vomiting and, later, orange-colored urine and jaundice (a yellowing of the eyes, gums and nonpigmented skin that reflects substantial liver injury). Severely affected dogs produce a blood-tinged vomit and bloody or blackened stools. "Since dogs can take several days to three weeks to exhibit serious signs of illness, all animals that consumed recalled lots of food should be examined by a veterinarian as early as possible," Center said. "Physical exams and blood tests are necessary to differentiate dogs that have been poisoned from those that have not. Unfortunately, the latent onset of signs may require that an individual dog be evaluated several times."

Cornell veterinarians have verified diagnostic tests enabling detection of seriously poisoned dogs. Aflatoxin curtails the production of cholesterol and many proteins that profoundly affect blood clotting. A minimum screening profile should assess the liver enzyme ALT to detect damage to the liver, serum cholesterol, total bilirubin concentration and the activity of the anticoagulant proteins antithrombin III (ATIII) and protein C. The coagulation protein tests, which have been adapted for dogs by Cornell researchers, have high value in detecting affected dogs but require collection of a special blood sample (citrated plasma sample) and an assessment by Cornell's Animal Health Diagnostic Center.

Any dog suspected of aflatoxin poisoning should also have a liver specimen sent to Cornell to definitively confirm the pathologic changes in the liver unique for aflatoxin toxicosis, such as fatty degeneration of individual cells.

"Even if dogs show no signs of illness, if they have eaten the affected food, they should have blood tests submitted to detect liver injury," Center stressed. "Dogs that show positive results on any of the above tests should be prescribed liver protectants for two months." For more details, veterinarians should check the Cornell Vet College Web site.

To send dog food to Cornell for aflatoxin testing, veterinarians should send a two-pound sample comprising about five handfuls of food pulled from different parts of the bag. If the food is negative, that does not rule out aflatoxin exposure, Bischoff stressed, because it may take days or weeks for dogs to become ill and the contaminated food may be long gone. The toxin may also be unevenly dispersed through the food. However, only a liver biopsy can definitively determine cause of death. Center requests that livers from dogs that have died recently from liver damage or suspected food poisoning be sent to Cornell for evaluation of pathologic changes. Veterinarians should check the Vet College Web site for information on sample submission.

The Cornell veterinarians also recommend that any suspected food be labeled as poison and stored away from animals and children. Save labels with lot numbers from bags. Until further information emerges, if food was stored in a wooden container, the container should be destroyed. Plastic and metal containers should be sanitized with bleach.

To report animals that might have died recently from the food poisoning, send an e-mail to diagcenter@cornell.edu, and the researchers will follow up with a questionnaire.