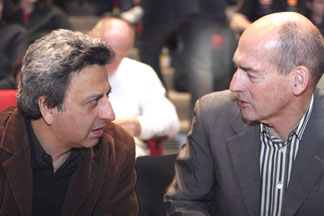 Cornell's College of Architecture, Art and Planning (AAP) is getting a new building that will be a contemporary architectural gem -- designed by the firm of Pritzker Prize-winning architect Rem Koolhaas, who studied architecture at Cornell under O.M. Ungers from 1972 to 1973.

The news was announced Thursday evening, Jan. 19, by AAP Dean Mohsen Mostafavi at a gathering of university trustees in the college's New York City facilities at 50 W. 17th St.

The dean noted that the college has finalized plans with the Office for Metropolitan Architecture (OMA), a firm led by several partners including Koolhaas, to design the building, which is to be named Milstein Hall. The location is central campus, near the college's current buildings Sibley, Rand and Tjaden halls and the Foundry. Milstein Hall is expected to unify the college's campus and allow for more interdepartmental collaborations and future growth, Mostafavi said. Project costs are estimated at $34 million. Groundbreaking is expected in 2007.

"This will be a building of international significance," said Mostafavi. "OMA is one of the leading firms in the world today with a great deal of experience in high-caliber projects. They are particularly innovative in the use of program and its relation to the design of space."

The Koolhaas firm's Milstein Hall will be the latest prominent building on campus by a contemporary architect of renown. It will join, among others, the Herbert F. Johnson Museum of Art, designed by I.M. Pei more than 33 years ago, and the Life Sciences Technology Building, scheduled for completion in 2007, designed by another Cornell-trained architect, Richard Meier '56.

Milstein Hall will reflect the ambitious educational goals of AAP's departments and celebrate the rich history of the school, providing classroom, studio and office space for each department, a major lecture hall and a boardroom, said Mostafavi. In addition, OMA's design will enable integration with the college's other buildings, including historic Rand Hall, which had been earmarked for demolition in previous design concepts, Mostafavi said. "OMA is increasingly interested in the transformation of existing buildings, such as their recent proposal for the Hermitage in St. Petersburg. This aspect of their work is especially relevant to the future of Rand Hall," he said. Koolhaas last visited the Cornell campus in April 2005, delivering a standing-room-only talk about his firm's recent projects. Among them is the Casa da Musica concert hall in Porto, Portugal, described in The New York Times as a building "whose intellectual ardor is matched by its sensual beauty" as well as "one of the most important concert halls built in the last 100 years." Other projects include the Dutch embassy in Berlin, the China Central Television building in Beijing and the much-admired Seattle Public Library.

Cornell first began planning for the proposed building when the family of New York City developer and philanthropist Paul Milstein gave AAP a $10 million gift in his honor toward a building in 1999. The decision to hire OMA -- which has offices in Rotterdam, New York and Beijing -- evolved as the college re-evaluated the functional and future goals of the project, said Mostafavi. "The firm's expertise aligned with an understanding of these goals and ability to best marry all necessary elements together. Their diverse and eclectic design portfolio demonstrated an ability to combine form and function in designs of complex, multipurpose structures," he said.

Founded in 1871, the College of Architecture, Art and Planning is both the oldest and the smallest college at Cornell. It houses the only Ivy League architecture program to offer a professional degree to its undergraduates, allowing them to work in their field immediately after graduation. Its city and regional planning department includes a historic preservation planning program in addition to urban and regional studies. Distinguished graduates of the college also include architects Peter Eisenman and Arthur Gensler; artists Susan Rothenberg and Louise Lawler; and urban planner Edmund Bacon.