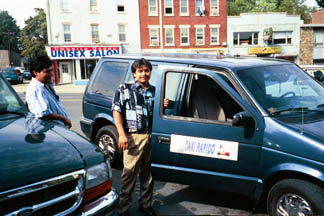 Pilar Parra
Immigrants often find it difficult to find transportation because cars are expensive and drivers' licenses cannot be obtained without immigration documents. Taxi services have been organized by immigrants in some of the more urban communities.

Mexican farmworkers and their families are settling in rural upstate New York communities in record numbers, often offsetting recent decades of population loss and making upstate much more diverse. However, two-thirds of the newcomers can't speak or understand English, and most are marginalized in their communities, finds a new Cornell University study.

Seasonal farmworkers in New York used to be primarily African-Americans, but 95 percent of the farmworkers now are Latino, primarily Mexican, and they are increasingly settling down with their families in the farm communities rather than returning to their home countries. New arrivals who left agricultural employment and settled in New York have only nine years of education on average, compared with 13 years for other community members; 28 percent are unemployed, compared with 6 percent of other community members; and their average household income is less than half (about $20,000) that of other community members (about $46,000), the study found.

Although the foreign-born population doubled in rural upstate New York between 1990 and 2000, residents of the host communities barely notice the recent settlers, most of whom are undocumented immigrants from Mexico. 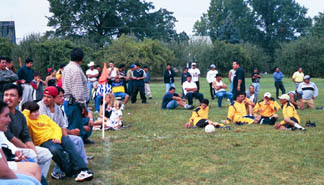 "It's striking how invisible these immigrants are in their communities," said Max Pfeffer, professor of development sociology at Cornell. "They're not even noticed. Yet if the communities don't do more to help the immigrants become an asset, the newcomers are bound to become an underclass, a burden to the communities and a breeding ground for crime and unemployment."

Pfeffer and his colleague Pilar Parra, a sociologist and research associate in nutritional sciences and a lecturer in Cornell's Latino Studies Program, have recently completed a study of more than 1,300 farmworkers and former farmworkers and 1,250 non-farm community residents in five upstate communities heavily involved in fruit and vegetable production and with significant populations of Mexican immigrants. A four-part series of publications stemming from the study discusses the nature and consequences of increasing numbers of immigrants settling in New York communities and is available on the Web at http://www.rnyi.cornell.edu/poverty_and_social_inequality/. The analyses are part of a larger effort to identify major population trends and their consequences for rural America.

"Most immigrants in upstate New York lack ongoing interactions with other community residents, which is one of the primary reasons why many farmworkers who came to these communities in the 1970s and 1980s are still marginal to the communities' mainstream," said Pfeffer. As a result, few community members are aware of the immigrants' needs or capabilities, and many are unsure how they feel about the influx.

"They're ambivalent," Pfeffer said. "Most community residents do not know whether the Mexican immigrants settling in their area are an asset or a burden. This ambivalence in part reflects a lack of connection to the immigrants."

The project was funded by a Fund for Rural America, U.S. Department of Agriculture grant and the Cornell Agricultural Experiment Station.