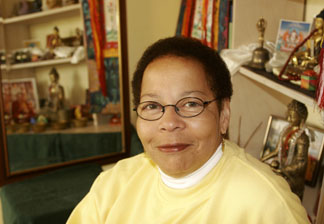 Marlies Bosch
Jan Willis, in front of her altar of Buddhist icons and images, is considered one of the premier American scholar-practitioners of Tibetan Buddhism in the United States. A social science professor at Wesleyan University, she is the author of "Dreaming Me: From Baptist to Buddhist, One Woman's Spiritual Journey."

Growing up in the deep South during the 1950s and '60s left Jan Willis '69, M.A. '71, asking a lot of questions. Willis, who went on to earn a Ph.D. in Indic and Buddhist studies from Columbia University, sought answers to the roots of hatred and whether peace in the face of such hatred is possible.

Her search would eventually take her to Nepal and back and lead to her current position as professor of religion and the Walter A. Crowell Professor of the Social Sciences at Wesleyan University.

It all started, however, with a trip to Cornell University when she was still in high school.

Willis grew up in Docena, Ala., a small mining town just outside of Birmingham, which she described as the most segregated city in America at the time. Her father, a steelworker, was deacon at a Baptist church the family attended. "Racism was palpable" during her childhood, she said, and hate crimes against blacks -- including children -- were common. Willis experienced this firsthand when a burning cross was planted on the lawn of her family's home.

By the 1960s, however, the civil rights movement was gaining momentum. In 1963, while still in high school, Willis faced police dogs and fire hoses to join a march through Birmingham led by Martin Luther King Jr. "Who wouldn't march?" she said, adding that the experience had been empowering.

Another seminal event in Willis' life occurred during her junior year in high school, when Beatrice MacLeod, associate secretary of Cornell's Telluride House, a living and learning center near campus for exceptional students, visited Willis' school to recruit high school students for the Telluride Summer Program. Willis was accepted, and the program proved to be an eye-opening experience. "It was the first time I had left Alabama ... and the first time I'd been in a mixed-race learning environment," she explained. Although Brown v. Board of Education , the landmark U.S. Supreme Court decision outlawing public school segregation, had occurred a decade earlier, many schools -- including the ones near Willis' home -- were still fighting integration.

The Telluride experience prompted her to apply to Cornell. She was accepted and returned to campus in the fall of 1965 as an undergraduate, becoming the first person in her family to attend college.

She originally planned to major in physics but soon realized she was more interested in philosophy. Her involvement in civil rights issues, however, continued throughout her time in Ithaca. She wrote the constitution for the Black Students Association (BSA) and was the only woman among its eight founding members.

During her senior year, members of the BSA took control of Willard Straight Hall, the student union, during Parents' Weekend. "We were responding to an episode where someone had burned a cross in front of the residence of 12 black students, an often-ignored fact," explained Willis, who, as one of the few women seniors in the BSA, was responsible for the women members' safety.

The takeover garnered much negative press for Cornell at the time, after the protestors were photographed carrying guns as they emerged from the building. But despite the presence of weapons, the surrender was a peaceful one, and BSA demands for black studies were subsequently met when both the Africana Studies Program and the Africana Studies and Research Center were created, Willis noted.

The era of campus unrest also was marked by protests against the war in Vietnam. It was around this time that Willis first became interested in Buddhism, having seen news footage of Vietnamese Buddhist monks and nuns immolating themselves to protest the war. "I wanted to know how someone could be brave enough to do that," she recalled. Her interest solidified when, while studying in India, she met several exiled Tibetan Buddhists. Despite the fact that they had recently fled from their home country following persecution by the Chinese, they struck her as being incredibly cheerful, she remembered.

More than 30 years later, Willis is considered one of the premier American scholar-practitioners of Tibetan Buddhism. She has studied with Buddhists in India, Nepal, Switzerland and the United States and has published numerous essays and books on the subject, including her memoir, "Dreaming Me: From Baptist to Buddhist, One Woman's Spiritual Journey" (Riverhead Books, 2002). She was recently profiled in Newsweek's "Spirituality in America" issue and in 2000 was named one of Time magazine's six spiritual innovators for the new millennium.

For Willis, however, the public recognition is not as important as the private benefits. "[Buddhism] has helped me in real ways to find what I was looking for as a young person in a world that was violent," she explained. "It showed me how to locate deep wounds that racism caused in my early life ... and having found them, how to heal them."

To this day, Willis credits her time at Cornell with having changed her life. "It was as if [MacLeod] reached down into the Jim Crow South and liberated me," she said. "I know how different my life could be if it had not been for that."