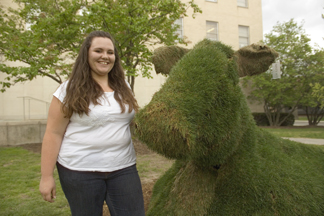 Jason Koski/University Photography
Danielle Hodgins '08 poses with Misty Sue, the sod cow she created for the class The Art of Horticulture.

This isn't just another sod story.

For final projects in the class The Art of Horticulture II (HORT 203), most students created works of art out of bean mosaics, baskets dyed with plant fibers, paintings made from plant dyes or turfgrass projects such as grass handbags and chairs with sod cushions.

Her creation? A larger-than-life sod cow that has spent the past week and a half lounging in front of Morrison Hall, watching people and traffic go by on Tower Road.

The cow's contours are remarkably realistic, and despite the fact that its coloring is nearly all green and it has the texture of a front lawn, it is immediately recognizable as a cow in repose.

Hodgins is an animal science major from a rural area near Syracuse. Her neighbors had cows, she says. She got her initial project idea from Frank Rossi, associate professor of horticulture, who gave a guest lecture in her class about turf and turf sculptures.

"I got really inspired," Hodgins says.

Designing the cow, beginning in February, took longer than the construction, Hodgins notes.

She had to obtain permission from Cornell's grounds department and animal science department for the spot in front of Morrison. Using a small toy cow as her muse, she first created a scale model and later sized it up for the actual construction, which she began April 24 and completed a week later. She thanks Dennis Osika, a grounds department director, for his help in bringing the project to life.

"My original design had a lot more animals in it, but they told me I was crazy, and that I really should shrink it down a little bit because it would take a whole semester just to do the construction," Hodgins says.

"I think it's remarkable," says Marcia Eames-Sheavly, a senior extension associate in the Department of Horticulture who teaches The Art of Horticulture, which last year split into two units, one focusing on plants as the subject of art and the other on creating art out of plants.

"I can't imagine how difficult it would be to create, for your first attempt, something so lifelike," Eames-Sheavly says. "It would be very easy to come out with something that looks more like a 'Sesame Street' character, or something very cartoony, or even an unrecognizable sculpture. My favorite view of the cow is from the back, where you can see the curve of the spine. I'm impressed that she was able to pull it off.

Eames-Sheavly notes that the nearly three dozen students who took the course this spring all poured a lot of creative energy into their final projects (a gallery can be seen at http://www.hort.cornell.edu/art/gallery/2006springprojects.html, and an exhibit of their work is on display at Mann Library through May 15).

"It's the creative process I'm interested in, as an instructor," Eames-Sheavly says. "Everyone has done a fine job; this one is just enormous."

The majority of the cow is a sculpted-dirt mound covered in chicken wire and carefully placed sod; the neck and head are more delicate, since they are hollow and have only a skeletal support structure. The ears are made of burlap and were seeded with rye grass.

The cow is named Misty Sue, which is marked prominently on a tag on the cow's ear. Hodgins says the name was suggested by her mother and her neighbor.

Hodgins has agreed to keep Misty Sue thriving through Commencement. The sculpture needs to be watered twice a day, and Hodgins is planning to re-sod parts of the head and neck as needed.

"I don't know what to do when the grass grows really tall," she says, wondering aloud. "Cut it with scissors or something, I don't know -- or weed whack it?

"A lot of people have complimented me on it," Hodgins says. "I did put a lot of work into it, so I'm happy that people are pleased with it."

The project has made Hodgins consider pursuing more horticultural design; she would like to do an independent study project in the future that might result in more creations like Misty Sue popping up around campus.

Has Hodgins received her grade on the project yet?

Misty Sue seems to agree, too, in her own quiet way.