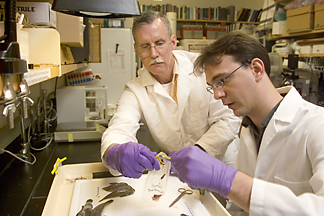 A deadly fish virus has been found for the first time in a variety of freshwater fish in the northeastern United States by Cornell University researchers.

According to experts at the Aquatic Animal Health Program at Cornell's College of Veterinary Medicine, the viral hemorrhagic septicemia virus (VHSV), which causes fatal anemia and hemorrhaging in many fish species, was discovered in upstate New York. It poses no threat to humans.

In May 2006, the researchers, in collaboration with the New York State Department of Environmental Conservation (DEC), isolated the virus in round gobies that died in a massive fish kill in the St. Lawrence River and in Irondequoit Bay, which is on the southern shore of Lake Ontario near Rochester, N.Y. VHSV was also found in a muskellunge from the St. Lawrence River in May.

VHSV is classified as a reportable disease by the World Organization of Animal Health (OIE), which means it must be reported to OIE if detected. The international agency usually imposes restrictions on any host country with VHSV to prevent fish from being moved to other areas and countries.

"If you think of VHSV, you think of the most serious disease of freshwater rainbow trout in Europe," said Paul Bowser, Cornell professor of aquatic animal medicine, noting that the virus does not currently pose as great a threat in North America. "Right now, it's a matter of trying to collect as much information and as fast as possible so we can notify the DEC so they can make management decisions."

Cornell's role is to diagnose and research the disease for the state agency. Bowser and colleagues are trying to develop a rapid diagnostic test, called a PCR (polymerase chain reaction), which would amplify and detect small amounts of viral DNA or RNA in a blood or tissue sample.

VHSV was first reported in 1988 in the United States in spawning salmon in the Pacific Northwest. It was reported in North American freshwater fish in 2005 in muskellunge in Lake St. Claire, Mich., and in freshwater drum from the Bay of Quinte, Lake Ontario, Canada. The virus appears now to have traveled east.

"For the sport-fishing public, this specific virus does not appear to be host specific to the species it infects," Bowser said. The virus is known to infect round gobies, muskellunge, freshwater drum, smallmouth bass, bullhead, yellow perch and crappie, but more study is needed to determine all the species at risk. "The significance to the sport-fishing industry is not known at this point."

Sport fishing for chinook and coho salmon is a $100 million annual industry for the Lake Ontario region alone.

Ecologically speaking, the impacts are equally unknown. The virus has the potential to alter the freshwater food web with both predators like muskellunge and prey fish like perch and crappie equally at risk.

"In a large ecosystem -- we're talking about the lower Great Lakes -- there really is no treatment," said Bowser. "The best management option is to try and contain the spread of it as best we can."