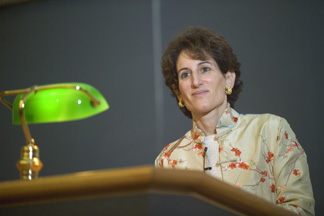 A Cornell student, arriving at Vladimir Nabokov's house in the 1950s, saw a fire blazing in the backyard. Suddenly the professor's wife ran out of the house and extracted pages of a manuscript from the flames. Not for the first time, Vèra Nabokov had saved one of her husband's books, but this time it was one of the 20th century's great novels: "Lolita."

So recounted Stacy Schiff, whose 1999 biography "Vèra (Mrs. Vladimir Nabokov)" won the Pulitzer Prize. She spoke June 8 to a packed auditorium of alumni, including some of Nabokov's former Cornell students, during Cornell Reunion Weekend.

The former students well remembered Vèra, who attended each of her husband's classes and was introduced as his assistant. She took over the classes if Nabokov was ill. She was said to carry a gun and was known to upbraid students who chattered during a Nabokov lecture: Did they not realize they were in the presence of a genius?

"If you've ever taken a cat to a vet in a carrying case, and extracted the animal in a blur of claw and hackles and muscle, you know what it is to write about Mrs. Nabokov," Schiff said.

Schiff said she was mystified by the Nabokovs' relationship. Her work was greatly complicated by Vèra's destruction of Nabokov's correspondence, all of which she wrote in his name throughout their 52-year marriage. For biographers, Schiff noted, "Facts are slippery, memories are faulty, parties involved always have vested interests, subjects can resist, documents mislead. Context is all."

In the case of Vèra, said Schiff, "From the start I knew that Mrs. Nabokov was the worst kind of subject: She was formal, she was stoic, she was private, selfless and capable of self-dramatization -- all the qualities on which biography tends to founder."

Schiff persevered, uncovering evidence that Vèra functioned as Nabokov's full creative partner, as well as his muse, editor, agent, translator, protector and chauffeur, among other roles. Her reticent subject would have hated Schiff's book.

Although a "no trespassing" sign seemed to loom over the life of Vèra Slonim Nabokov (1902-91), Schiff ignored it. "Vèra lived by myths: She never contributed to Vladimir Nabokov's work, she was never worried about the publication of 'Lolita,' never felt destitute when the family had no money, never raised her voice when her husband told her he was in the midst of an affair. All of these statements were false."

Moreover, Vèra was "a master of the feint, a champion bluffer. One of her favorite tactics was to obscure the truth with a riddle. No one understood the staying power of apocrypha better than Vèra," Schiff noted.

She said that in the 1940s Nabokov flirted with a Wellesley student and told Vèra he loved small-breasted women. Years later she said that her husband as red-blooded Russian could never have said such things. "I began to recognize that the disavowals were the story," said Schiff. "The silences were my text. I looked elsewhere for the truths."

Throughout his career, Nabokov dedicated his books to his wife, who made them possible and could not bear a bad translation or anything else that might detract from her husband's public image.

"In Vèra's outrage, I learned a great deal about her, including how deeply devoted she was to remaining in the shadows," said Schiff. "The art of biography comes in part from the author's ability to express doubt and uncertainty. On the other hand, clues are everywhere if you know to handle them. I knew a great deal about Vèra from her very secrecy."

George Lowery is projects manager for the Office of Humanities Communications.