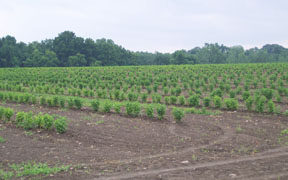 Welcome back the black currant. The growing and importation of currants were banned in New York and other parts of the United States for more than half a century because they were thought to help spread a fungus that threatened the timber industry. Three years ago New York became the latest state to repeal the ban, and farmers are starting to jump on the currant cart.

The campaign to repeal the ban in the state was spearheaded by Hudson Valley fruit grower Greg Quinn. After reading about the repeal, Curt Rhodes of Penn Yan, N.Y., who in 2004 had retired after a 40-year career as a fifth-generation vegetable farmer, applied for and received a $10,000 New York Farm Viability Institute (NYFVI) Small Specialty Crops Production Business-grant to plant a one-acre field trial of black currants.

After all, red and black currants have four times more vitamin C than oranges and twice the antioxidants of blueberries.

"The first year I only expect 1,000 pounds on the acre, but in the second and following years I plan on harvesting 2,500 to 3,000 pounds per acre," Rhodes says. "This has been such a successful venture that I recently planted 17 more acres of black currants. The first acre will be harvested by hand. Next year I will have to invest in a mechanical harvester."

Olga Padilla-Zakour, associate professor of food processing and director of the New York State Food Venture Center at Cornell, has been working with Rhodes to explore new potential products for his black currants.

"Once the currants are in full production, we will be developing new beverages, jams and other products. At that time, we will be able to document the levels of beneficial anti-oxidants and vitamins in each product," Padilla-Zakour says.

Rhodes' first harvest has been sold to Montezuma Winery in Seneca Falls, N.Y., for a new variety of fruit wine (cassis, the famous liqueur of Burgundy, is made from black currants). Winery owner and winemaker Bill Martin says, "We make 23 different wines from honey, fruit and grapes. The black currants will make an important contribution to our line."

The federal government had banned the growing of black and red currants in 1911 when the burgeoning logging industry put pressure on lawmakers to eliminate the currants because they were thought to be an intermediate host of white pine blister rust. New disease-resistant varieties of currants were later developed and in 1966 the government left it up to the states to lift the ban. Quinn persuaded New York state to lift the ban in 2003.

"New York state was the leading commercial producer of red currants in the U.S. before the ban," says Quinn, who is teaching landowners and farmers how to grow currants. He wants to see New York return to being the number one producer of currants and set the standard for quality. Quinn has developed 65 new currant products.